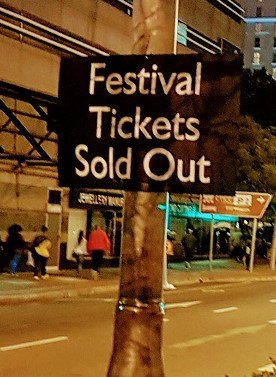 CANCELLED … another casualty of Covid-19
The Cape Town International Jazz Festival (CTIJF) is just around the corner, March 27-28. CallOffTheSearch will be back this year after making the terrible mistake of missing last year’s festival and the year before that … oh how we rued the day/s … and weeks … and years. Here is just a little reminder of some of the things that blew us away in 2017…

Let me widen the deep green circle of envy that surrounds holders of tickets to the Cape Town International Jazz Festival beyond lovers of jazz. The annual sellout event is a diverse musical feast that mixes styles and expands genres in delightful and surprising ways that would please anyone who likes music – or even just good times.

Tom Misch’s description-defying set at Bassline on Friday night is a perfect case in point. To talk about the beat-infused, soulful, hip-hop-inspired sounds in a meaningful way one would want to include the words jazz and funk – and there were definitely nods to house and even vague hints of techno – and many more sounds that I don’t have words for.

Bassline is one of two outdoor stages, and a slight breeze on a cool Cape Town evening added to the sensory delight. Spectacular visuals mirrored playfully on the bridge above the stage and enhanced the feeling that we were at an intimate club gig.

I remember when Mango Groove was just getting started, something that a majority of their audience at the Manenberg stage wouldn’t be able to say. It was surprising to see many youngsters singing along to the old favourites from this iconic band who seemed to define the spirit of the times in the early nineties.

Two and a half decades later Claire Johnston is still bouncing around the stage belting out those soaring vocals. The distinctive sound of the pennywhistle helps take us back to that time when this 11-piece band burst onto the scene with its distinctive combination of pop and township jazz seeming to connect township and suburbs in a way that filled us all with hope.

Another performer who represents a specific melting pot moment in time is Tresor, pictured, who was up on Bassline later on Friday evening. The South Africa-based instrumentalist, singer, and composer from the Democratic Republic of Congo (DRC) is a living, singing, dancing reminder of the rich culture that our porous borders and lax immigration control has bequeathed us.

Like so many of his countrymen Tresor, an orphan, made his way to South Africa and worked as a gardener, car guard, and security watchman while fighting for a break, in his case into the music scene. Seven years later he seems to be well on his way to the galaxy where he belongs, having won a Sama award and opened for British superstar Seal.

He oozes confidence and sex appeal in his black leather trousers and pilot-style sunglasses. Move over Tom Cruise – and you too, Michael Jackson (RIP).

En Vogue on the Manenberg stage at just after midnight were a fitting closing act on a night that had taken the audience through time and around the world a little. The original “funky divas” from America danced, strutted, and belted out hits, old and new, in a stonking set that would make Madonna look a little tired (and totally wore me out).

One could swear the three ladies haven’t lost an ounce of sex appeal and relevance since their debut album Born to Sing in 1990. They have gone on to sell more than 20 million records and can still set fire to a dance floor.

I will resist looking back sadly, however. It’s true that they don’t make them like they used to and etc but the embarrassment of riches of young talent at the Cape Town International Jazz Festival helps with the nostalgia. On that score, let me get ready for tonight’s opening act, the Chris Hani High School band.