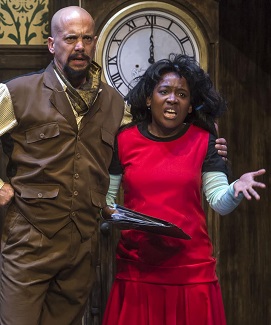 A motley crew of fools, an evil seductress and many a double crosser mucking about, stabbing each other in the back, wrecking the place. Sound familiar? The good news is that this is the theatre: art imitating life, one might say.

That said, The Play That Goes Wrong, showing at the Theatre on the Bay in Camps Bay until June 17, is actually a wonderful, side-splitting break from real life and its clowns and their wrecking balls.

The show starts with an amateur drama society staging a 1920s murder mystery. Everything that could possibly go wrong does and the production quickly descends into absolute chaos.

The audience are frequently weak with laughter but are soon shocked back to their senses by what look like potentially catastrophic near misses. Doors get opened in faces, people fall or get pushed out of windows and violence erupts between the ladies.

There is all manner of chaos as the set collapses around the cast. Somehow the actors doggedly pursue the storyline to the end. But do I remember who killed whom? I haven’t the faintest. It is just too funny to care, even for those (who shall remain nameless) who think they are too serious for slapstick.

The Play That Goes Wrong – part farce, part slapstick, 100 percent hysterical – went on to be a hit globally after winning a number of major awards on the London stage. Even Patsy (Joanna Lumley) loved it: “We laughed until the tears ran down our faces! It has to be seen!”

This South African production comes to Cape Town after a sell out season in Johannesburg.

Mucking about while everything falls apart might sound ominously familiar, but this show really will make you forget about real life for a bit.