Cape-style treats for the people of Jozi

Things are looking up for our brothers and sisters in Jozi. First, the news that the DA (with a little help from Julius and the Red Berets) will soon be filling those potholes, and now a little something else cultivated in the Cape … and I am not talking about Bubbly, although you might want to pour yourself a glass of Pongracz in a moment.

A birdie just whispered in my ear that Cape Dance Company’s wonderful 1,000 Shepherds is on at the Joburg Theatre this weekend as part of a collaboration with Moving Into Dance Mophatong and Tshwane Dance Theatre.

There are just four performances, from 18 to 21 August. Go on then Joburg, be the decisive and discerning people you say you are and book those tickets right away!

Review: Journey
through another world 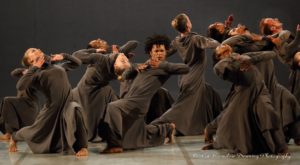 A Thousand Shepherds takes your breath away as it screams out to all your senses, most loudly to the sixth one.

Inspired by the concept of pilgrimage, the African première of Spanish-UK choreographer José Agudo’s acclaimed work skillfully takes the audience on a spiritual journey that borders on the religious.

The invitation to start the journey is flamenco-inspired, rhythmic and flowing movements where the costumes mimic the dance, magnifying the seduction. I didn’t really understand the costumes (original design by Kimie Nakano) when I saw them on the pre-show stills but, boy, did they make sense once they started to dance!

Barely imperceptible shifts in style and speed build to a tribal tempo, which is both haunting and thrilling.

And then it is over too soon, leaving us feeling like we had only just glimpsed another side where we too are at one with sound and movement.

We are fulfilled, but long for more.