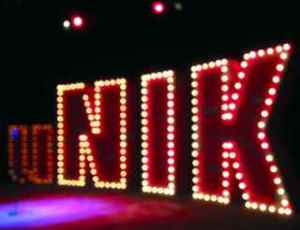 It is not only Nik Rabinowitz’s two small children nipping at his heels. There is a pack of hungry young wolves chasing him from behind.

Cape Town comedy lovers are spoiled for choice. Memories of Loyiso Gola’s fab performance were still fresh in our minds when we joined Nik for a manic, fun-filled ride while Mark Lottering played Scrooge next door.

Only a lunatic would add another funny man to the mix (you might think).  So Nik Rabinowitz, well-known lunatic, asks Kagiso ‘KG’ Mokgadi to open for him.

WTH*, I thought. I even called out to the gods, “What is this madness?” I soon had my answer. KG came out on to the stage and told us almost immediately: “My dad is a sang … goma!”

Aha, we all know what that means. It is the metaphorical gun to the head. He had Nik Rabinowitz up against the wall.

But then KG started to work his own kind of magic on us. We laughed out loud and he surely made the ancestors proud. KG might need “My dad is a sang … goma!”  to jump the queue at Mzoli’s  but he has another kind of magic to work on stage! His is definitely a name to watch.

Then Nik Rabinowitz hurtled out on to the stage and showed us that the main act is still clearly the Main Act. His manic, yet flawless, delivery left us breathless, our sides well and truly split! (Warning for the faint-hearted: he also left our ears ringing a little more than usual with all the F.ing and blinding.)

*WTH: What The Hell

Stand Up (Nik Rabinowitz with Kagiso ‘KG’ Mokgadi) is on at the Baxter Concert Hall until January 11 2014. Bookings at Computicket