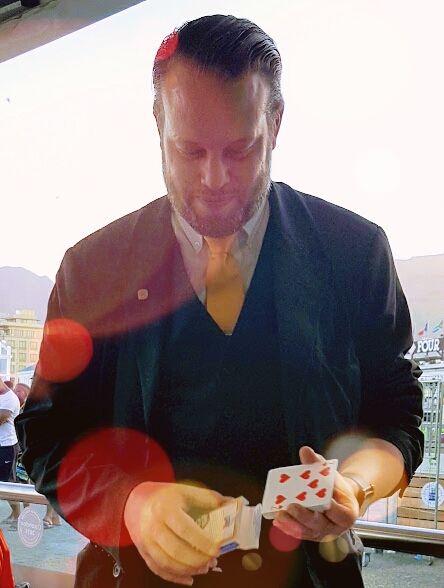 As New Year’s resolutions go, “adding magic” is pretty impressive. And, for magic fans living in the Mother City, there isn’t even much conjuring required with the Cape Town Magic Club opening for Monday Night Magic Season 3 on January 16.

After two successful seasons of Monday Night Magic at Cape Town Club in Gardens, the Cape Town Magic Club moves to a new theatre in the Bean Chamber of Truth Coffee Roasting at 36 Buitenkant Street for this season, which runs until late March.

Audiences will be entertained by a variety of local and international magicians, illusionists, mentalists and sleight-of-hand artists at the weekly event to be hosted by Marcel Oudejans, the Cape Town Magic Club’s founder.

The best gift ever …

In terms of pure wow factor, a pop-up show by Marcel is the best present this magic fan has ever given (and received, of course, since treating your friends or family to such a gift usually involves indulging oneself too).

My last-minute Christmas gift to assorted siblings, nieces and nephews was to have Marcel appear (as if by magic of course) at our dinner table at the V&A Waterfront and do a private show for us.

Marcel amazed the children and amused and confounded the adults and then, hey presto!, just as fast as he had arrived he was gone. No mess, no fuss, starry eyes at our table and jealous questions from neighbouring ones the only “evidence”.

As far as sustainability goes, this gift ticks the box too. My gift of wonder left no physical trace, not even wrapping paper.