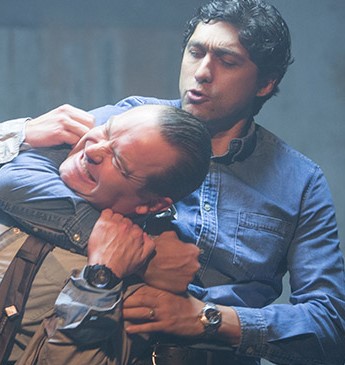 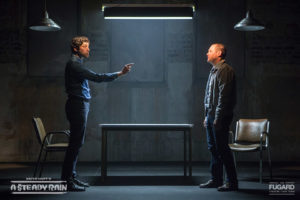 In life, as in art, there is much to watch in Cape Town right now: the party implodes, the edifice crumbles. Taking a break from real life drama, I saw Keith Huff’s award-winning Broadway hit A Steady Rain during its run at the Fugard after a sold out run at Alexander Bar.

The relentless drama made me feel a bit like I was riding in the back of a squad car with the two Chicago cops, Joey and Denny. The script tracks backwards and forwards speedily between their life as cops and their friendship, both of which seemed to be on a knife edge most of the time.

I have to say, though, I thought the story had very little to do with what the blurb described “those whose inner need to serve and protect both consumes them and rips them apart”.

All I could see was two people struggling with the dark, fluid pools in their own souls. Occasionally they bashed heads with life and each other and various criminal types but largely it seemed to be two individuals battling with their own demons.

What lines would you cross for love, or for a slice of happiness? What would you risk for a taste of the forbidden fruit, whether that was a near epiphany with a ‘lady of the night’ … or, even, maybe, your best friend’s wife? 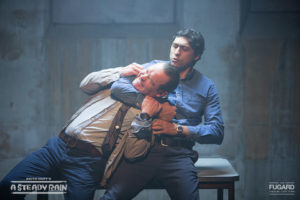 Sometimes good conquers evil; sometimes evil comes out on top. But, as in police car chases and life in the suburbs, real life is usually kinda unheroic and messy.

I was gripped from beginning to end, and left wondering if the actors had come from Broadway with the show. Flawless performances, Chicago accents and all, from Brent Palmer (The Kingmakers; Bench) and Nicholas Pauling (Clybourne Park; The Pervert Laura).

Produced and presented by: Eric Abraham