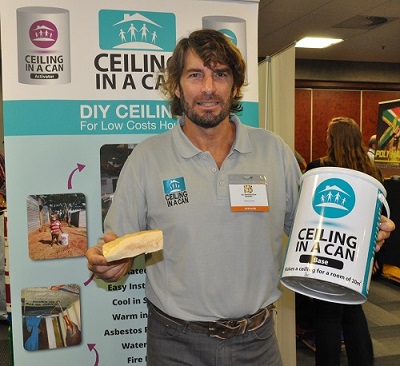 The Market on the Edge at the Cape Town stadium on August 28 and 29 showcases many tech-based innovations – robots and gadgets, apps and ideas to protect IP – as well as providing a platform for what seemed like the odd snake-oil salesman and even someone claiming to have created a time machine.

In all the flashing lights (mostly solar), smoke and mirrors, the Ceiling in a Can stands out for its simple brilliance.

Inventor Dave Pons is exhibiting his latest invention, the Ceiling in a Can, at the market, running alongside the 8th SA Innovation Summit, in the hope of securing financial backing to bring it to market. This solution for homes that have little or no insulation is perfect for shacks or low-cost houses, which seldom come with a ceiling installed.

The product comes in the form of two five litre tins of liquid – one a base, the other an accelerator – which will hopefully soon be sold over the hardware store counter. The projected price for this is R300 for the two tins, enough to make a ceiling for a smallish room.

It is an easy, cheap DIY solution. Invite some mates around, says Pons, cover the floor with newspaper so that the ceiling does not bond with the floor, and empty the two cans onto the floor. And, hey presto, a chemical reaction starts between the liquids, which will foam and expand and then harden into a light but durable ceiling which can be lifted into place and secured.

Pons says the materials used, as well as the reaction created, are non-toxic and the resulting ceiling is water-proof and fire-retardant. He has done various trials and has met many building supplies merchants, who have confirmed an eagerness to stock the product as soon as he gets it into production.

Leading South African innovator and trend analyst Dion Chang could have had this very product in mind when he told the opening day of the Innovation Summit that solution-based innovation is something we are very good at in Africa. He also said it can be a fairly reliable route to success, adding: “Solve a problem and you have hit gold.” Time will tell for Pons and his Ceiling in a Can.

Innovation comes in many shapes and sizes, and certainly doesn’t always have to be serious. It can be astonishing, it can also be delicious, as with David Petersen’s collaboration with Belgian chocolatier Jean-Pierre Fortuin, which combines South African fruits, nuts and spices with outstandingly gorgeous chocolates, making for sensational and innovative nibbles.

From the practical and useful through the delicious to just plain “out there”, that is invention for you. There was some serious head-scratching at one stand where a couple of guys were telling anyone who would listen about their creations. Apparently it all started with a decision to create a cross-platform computer operating system.

To test the operating system it was decided to invent a mobile phone. The obvious next step was to make their own computer. That one ticked off, why not make a television set.

This was where the creative juices seemed to take the team on a slight detour and they ended up making a time machine. As much as I like to dream and am keen to time travel, it is hard to do a sensible critique of these inventions since the team behind them are still looking for funding to build prototypes and hopefully take their various ideas to market.

My money is on Pons and the Ceiling in a Can, and not only because he is a step ahead, with a prototype made and testing under way. The time travelers lost me when they said they had discovered in their travels that the moon was not real but rather a reflection of the earth.

I wanted to shout, “Tell Neil Armstrong!” But such cynicism seemed inappropriate at a forum where many speakers had placed emphasis on the need for inventors and creators to be courageous, take risks, and to accept failure as part of the process.

The Market on the Edge is open to the public on Saturday August 29.
– Siobhan Cassidy, African News Agency