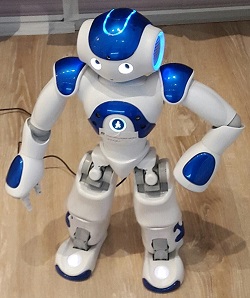 Watching demos by MTN and Huawei at the Africa.com conference in Cape Town this week was a wake-up call for at least one person in deep denial about the arrival of the future being some way off.

These demos suggested that the future is here and most of us are already actively in it. (Readers terrified about the perceived dangers of Big Brother-style surveillance might want to look away now.)

The two companies are showcasing objects that are connected to each other using Narrow Band Internet of Things (NB-IoT), a low power, wide area technology that can connect objects to the Internet of Things more efficiently as a result of a stronger and more penetrative signal.

MTN said in a statement: “Connecting these devices to the internet by means of a mobile network is where NB-IoT comes into its own.”

MTN and Huawei have signed an agreement to allow their collaboration “to happen at an exponential rate as both organisations are committed to an all connected Africa”.

Michael Ma, president of Huawei Cloud Core product line, said: “We are very pleased to announce our strategic co-operation with MTN in the IoT field … We look forward to a continuing close relationship with MTN to bring more IoT services to Africa.”

MTN and Huawei are showcasing a smart refrigerator, User-Based Insurance (UBI) and a smart water metering solution at the conference at the Cape Town International Convention Centre. Small sensors in these “things” (fridge, car, water meter) deliver data about their performance.

Alpheus Mangale, MTN South Africa’s chief enterprise business officer, said: “We are pleased and excited by the enabling role we are playing to usher an era of enhanced connectivity in Africa through the strategic partnerships we enter into and through the investments we have made in our expansive network infrastructure across the continent.

“The IoT market is expected to grow exponentially in the next few years, and MTN plans to be at the forefront of this digital revolution. We hope to enable how governments, enterprises and industries work,” he added.

The global IoT market is widely expected to be worth trillions of dollars by 2020, with 450 million cellular IoT connections in Africa alone.

Huawei and MTN plan to deploy this technology commercially next year, but people might be surprised to know how much some of it is already in action in everyday environments.

Like many other drivers, I am sure, I happily carry the gizmo/sensor/whatsit sent by my insurance company in my car, “keeping an eye on me” [chuckle] wherever I go.

It never really made me feel that I was under surveillance. That is just too much sci-fi, I thought. But then I attended a Huawei-MTN demo at Africa.com.

Using big data technology to analyse and score driving behaviour, the insurer can adjust and optimise their offering for each driver. Good driving can be rewarded, and risky or dangerous driving can be “identified”, in the words of MTN. (I think they mean punished).

As I said earlier, this all seemed like so much mumbo jumbo to me until I saw the demo at Africa.com.

Some information relayed by the sensors in a car was obvious, such as time, distance and routes taken. Less obvious and significantly more revealing were examples of less than optimal driving, such as speeding or hazardous cornering, that were recorded and transmitted. We were shown the very sections of road where the infractions occurred.

This is great news for those excellent drivers who prefer to pay a premium directly related to the risk they represent, but less exciting to those individuals who like to sneak into the crowd sometimes and pay average bills.

It is hard, however, to imagine a downside to the smart water metering solution, which enables the automated collection of utility meter data over the cellular network.

Powered by the NB IoT technology developed by Huawei, smart water metering helps to cut the cost of manual meter reading as well as sending early warnings about leaks and other inefficiencies that otherwise might continue for years.

The smart refrigerator solution enables remote monitoring of fridges to help with stock control as well as electronic issues or even user issues, such as a door being left open, or maybe it was the seal on the door that was faulty.

Electronic inventory control and cold chain management have many more benefits for businesses, from manufacturers to bar owners, than ensuring a perfectly chilled beverage after a long journey, however well or badly one drives, although that is a good selling point.

A chic and shiny future