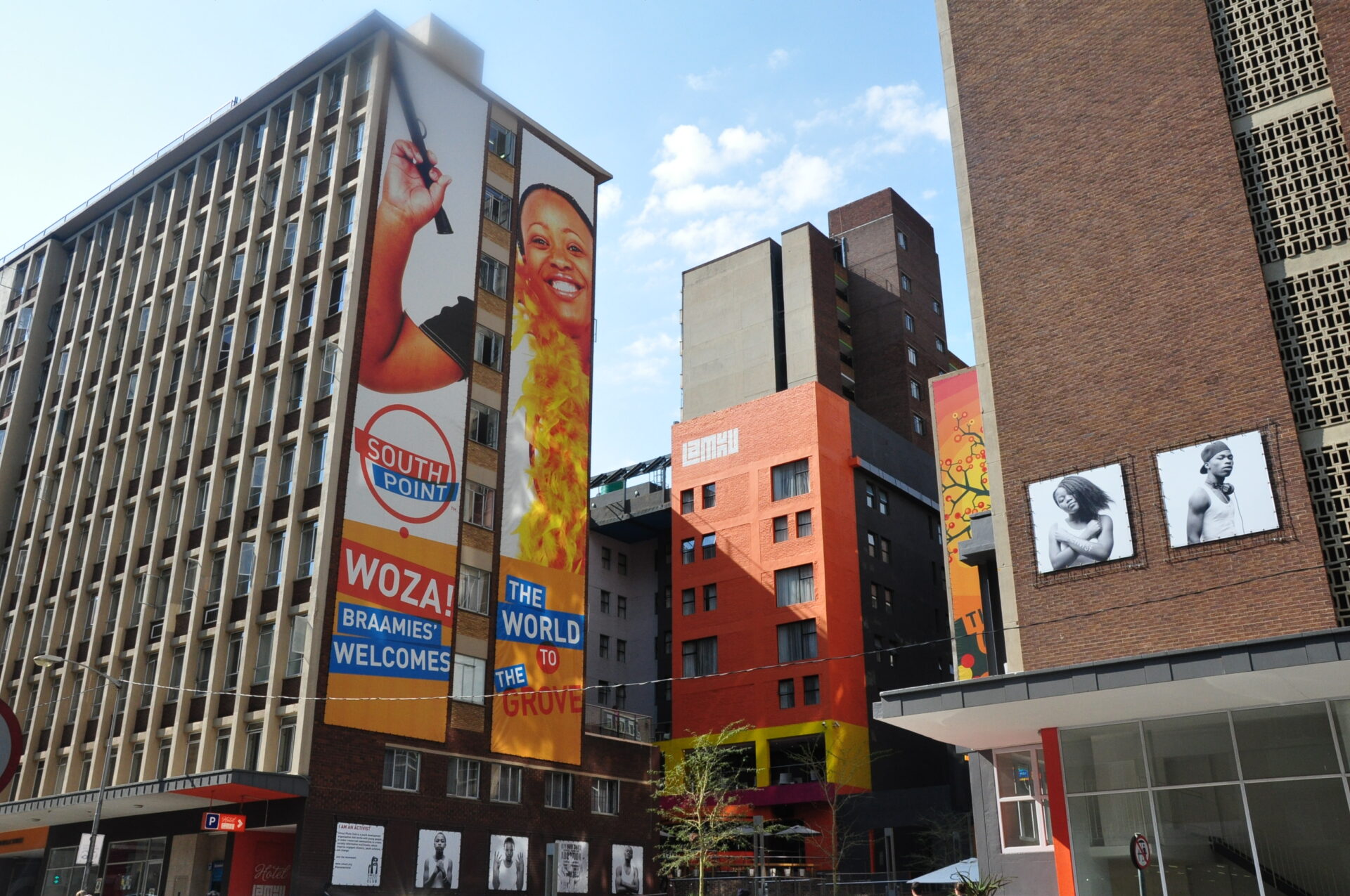 While I was away, Johannesburg has turned its back on its old emotional insecurity and obsession with guns, gangs and guards and blossomed into a hip, arty, fashionable party town.

From Parktown all the way Downtown, the city exudes that old familiar confidence, cockiness even. Now there is hope too. You can see it on the streets, where the people of mzansi – the black, the white and all the beautiful shades between – can be seen now that they have escaped those damn shopping malls and the tyranny of fear of each other.

One remaining reason to visit a mall is to cruise and be cruised with the Black Diamonds in the bar on the 6th floor of the Southern Sun Hotel in Hyde Park. If the view doesn’t, buying a round of drinks might make you feel a little giddy. But nobody seemed to mind with frequent offers of: “Can I buy you a drink?” Recession? What recession?

The views across the northern suburbs are spectacular. Aah, who could forget the quality of light on the Highveld?

Be sure to book

Many businesses have long fled the city, but come Saturday and Sunday the tide has turned with everyone from the leafy ’burbs heading downtown. On Saturdays the Neighbourhood Goods Market brings Braamfontein to life.

The market, which occupies a couple of floors of an unused parking garage between Juta and De Korte streets, is almost exclusively dedicated to food and drink, although I did spot my old chums Blue Collar White Collar in a corner with a few other boutiquey types selling clothes and ceramics.

The little sister of Cape Town’s fabulous Neighbourhood Goods Market at the Old Biscuit Mill in Salt River is full of promise! Among all the steam and steaminess of the slow food and fast girls and boys I stumbled upon a dazzling little idea that seem to epitomise the new spirit of Jozi.

This crafty chick Diane has found a way to use recycled paint tins
to reinvigorate urban landscapes, make kitchen
gardeners of city slickers and maybe even feed the nation.
Seriously you can grow vegetables in tins hanging from walls.

Check it out: Cangro http://www.cangro.co.za/

The whole neighbourhood has really
picked itself up and dusted itself off
with all sorts of galleries and
slightly overpriced but fabulous
coffee shops where every bean
has a story to tell.

And something for after church …

On Sundays, acquisitive suburbanites venture even further into town,
heading for Arts on Main on the eastern side of the city centre.

There is plenty to eat at this market, but there is a lot more for the magpies too … from fridge magnets and bags and books to vintage clothing via metal ‘sculptures’ of the Joburg skyline and artworks by William Kentridge.

The newly cleaned up and revived area around Arts on Main, until recently a rather terrifying wasteland deserted by anyone with the means to get out, is known as the Maboneng Project http://www.mabonengprecinct.com.

Other delights in this sexy urban neighbourhood are the 12 Decades Boutique Hotel http://www.mabonengprecinct.com/developments/12-decades-hotel and the Bioscope Cinema in Fox Street.

The cinema holds themed nights where film and fuel are combined in fun ways, for example a noodle dinner served during a Kung Fu movie.

A cool concept but we didn’t get to try what they were serving during the screening of Otelo Burning as we had already filled our tanks with cold beer and good African food in Pata Pata, the restaurant next door. We loved our deliciously meaty meals and the restaurant’s unselfconsciously cool vibes.

The tables alongside us reflected Jozi’s easy mix: a young white couple on one side, a middle-aged black couple on the other, and then, much to my amusement and pleasure, the people-watcher’s nirvana of the large, extended African family, from gogo who sat wrapped in her blanket to the babe in the arms of mum, who looked like she had another bun in the oven already.

All of this in the Deepest Downtown on a Sunday night in the autumn.

PS In case you are wondering, I was in Joburg for a week and nobody told me about a crime.

Upgrade for madness at the 12 Decades

I was reminded on a recent visit to Johannesburg that one should never hesitate to ask for another/a better hotel room. On our second visit to the 12 Decades Hotel in the City of Gold we were shown to exactly the room we stayed in before. Each room is decorated in the style of a decade in the city and we wanted to experience another one so we asked to be moved. All other standard rooms were booked but, since we were returning customers, the hotel was happy to upgrade us to a suite. (Ten extra points for empowering reception staff to make and implement decisions like this immediately)

We were moved to more than just another decade! The suite was ‘very Jo’burg’, playfully showing the finger to the modern obsession with health and safety. It felt right, proper even, to be looking across Johannesburg from the windows of a room that seemed designed to encourage a little madness. Perfectly suited to my sense of adventure recently amplified by an early mid-life crisis.

The view was best from the mattresses (interestingly, there were two large doubles) perched high on a platform overlooking the eastern side of the city. Most of the rest of the suite was dedicated to large raised wet area. Flimsy curtains hanging loosely around a tiled platform overhung by two rain showers pretty much guarantee a wet wonderland and much hysteria and sliding around.

Another surprising source of amusement in this quirky hotel is taking the lift. Any time of the day or night, there always seems to be someone interesting and/or eccentric. Judging by fellow occupants of the lifts, the hotel is usually occupied by a mix of hung over, acheingly cool young artists (longer-term residents, in studios) and young, kind of wacky foreigners. Nothing vanilla here.

The suites also have kitchenettes and a small separate lounge area. I am sure this makes them great for longer stays, but we didn’t have time or reason to test drive these areas. A wide variety of restaurants, bars and clubs, as well as Arts on Main and the Bioscope cinema in the surrounding blocks kept us fuelled and amused.

I will definitely be staying at this urban, edgy hotel next time I am in town, which will be soon, since …