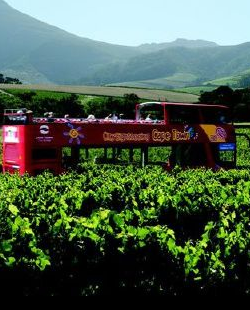 Even on a cold, rainy day the CitySightseeing (www.CitySightseeing.co.za) tour is a really fun and interesting day out in ‘Escape Town’. You might not be able to see the mountain but, hey, you know it is there.

A visit to national treasure Groot Constantia is always fabulous and fortifying. The grounds and buildings are somehow even more beautiful and romantic when cloaked in the misty wetness of Cape Town’s soft drizzle. And being a fan of their wines puts one in the company of Napoleon and Frederick the Great!

The sweet and subtle blanc de noir, that brings to mind strawberries and summer. The chardonnay, which surprised and pleased a harsh critic who normally finds the grape too woody and/or oily.

The peppery Pinotage put the tongue on high alert, greedy for more excitement, which was shut down by one sip of the super elegant shiraz, which seemed to satisfy all longings. Call off the search!

Now I am looking forward to Keenwä restaurant’s food and wine pairing with Groot Constantia on August 28. I am expecting some sensational combinations.

Visiting Imizamo Yethu township on a cold and rainy day amplified feelings of sympathy and awe for people living dignified lives in the less-than-dignified circumstances.

Tourists and locals should make a day of it with a hop on-hope off ticket. CitySightseeing has recently opened a new office in Long Street, Cape Town’s ‘Party Central’. The company has recently added walking tours to its repertoire of bus tours and riverboat excursions. It makes perfect sense to explore our little village on foot.

Living in a place as consistently spectacular as Cape Town is probably a bit like being married to Milla Jovovich or Michael Fassbender. Sometimes you have to pinch yourself to wake up all over again to the ridiculous hotness of the whole situation. And there’s nothing like pretending to be a breathless tourist in your own city to take you back to those first flushes of romance with your heady hometown.

So, as summer rolls into the Mother City and the days grow long and lustrous, we decided to take full advantage of the slow-mo sunsets and hopped aboard one of those bright red topless buses for a CitySightseeing Night Tour of Cape Town.

The Night Tour runs through the balmy months from September to early May and this was the launch event for the summer season, which meant that the iced Bubbly was flowing particularly freely thanks to a generous supply from Groot Constantia. We also toasted the launch of City Sightseeing’s latest tour offering – the super-zooty Cape Point Sidecar Tour.

We joined a festive group of fellow sunset cruisers for some sips and snacks at CitySightseeing’s home base just outside the Two Oceans Aquarium at the V&A Waterfront. When our number wasn’t drawn from the hat to travel up Signal Hill via sidecar, we accepted our not-exactly-tragic fate and boarded the bus as the last rays of the day started to turn golden.

But our luck quickly shifted as one of the organisers stepped aboard saying that someone had chickened out of the al fresco route up the mountain making space for two on the first bike with sidecar. We were quick to jump to it and, after zipping up the red leather biker jackets supplied by our guide, Tim, we exited the Waterfront in convoy, wending our way toward Mouille Point and onwards…

The freshness of the salty sea air as we cruised along the seaside was exhilarating, but, for me, the real thrill was the fleeting voyeurism of moving through the city in this way. Riding in the sidecar is so much more of a visceral, live experience than driving in a car – even a convertible. You feel that much more in touch with the passing parade as you zoot along, past the crowd sipping cocktails at Sotano and La Vie.

A guy walking a Daschund waved as the traffic light turned green and we cruised onwards along the Monaco stretch towards Camps Bay, not travelling that much faster than the late afternoon joggers wending their way along the curvaceous sunset boulevard.

We made our way up the mountainside and arrived at Signal Hill just in time for the majesty hour, when the sun turns into a fiery orange ball and descends beneath the vast horizon line of the Atlantic.

It got decidedly nippier up there after the sun had set, but that didn’t deter us from enjoying a range of sunset picnic treats with our fellow travellers. We ended up sharing some laughs with a fresh-faced German backpacker (who had booked her journey around the country via the Baz Bus) and a young hipster from Botswana. We listened as the two of them discussed plans to reconvene for some marimba music later at Mama Africa on Long Street. 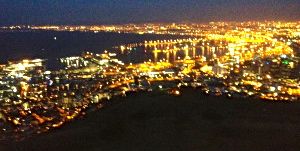 As the harbour lights started to sparkle beneath us, we climbed aboard the bus to cruise down Kloof Nek Road back into town. The journey down was dreamy and relaxing. I put on the headphones and listened to some classic Mzansi tunes, from Johnny Clegg to Miriam Makeba interspersed with fleeting commentary about each district as we pass through it – Higgovale, Bo Kaap…

CitySightseeing Cape Town seems genuinely passionate about providing locals and tourists alike with memorable ways of experiencing the Mother City – and beyond. In addition to their City Tours, they also offer Wineland Tours and Peninsula Tours. (Our guide, Tim, said his favourite is the sidecar tour of the Winelands because he gets to savour the changing scents of the vineyards and orchards in the air as he cruises along on the bike.)

In town, we took a detour via the legendary flower market, where the sellers were abandoning their buckets of a million coloured blooms for a night of rest. Then it was time for us to disembark and venture onwards into the night with a renewed sense of awe for the city we’re in…