Crossing from the sane side

The Search for Intelligent Signs of Life in the Universe at the National Arts Festival is amazeballs! And, forthwith, I will be using amazeballs and other words that I have previously avoided because they sounded a bit too loony.

After this brief tour of “sanity” with Trudy, our crazy bag-lady guide, I am happy to be associated with the fruit-loops and the nut-jobs on her side, rather than with many of the functional lunatics in the “sane” world.

Trudy tells us that going bat-shit crazy was the best thing that ever happened to her. She says that now she refuses to be intimidated by reality, “which is the leading cause of stress in those who are in touch with it”.

It sounds quite tempting (if not exactly amazeballs), but Trudy is quick to warn us that it is not for everyone.

She is well placed to help her space chums since some rewiring of her brain circuitry done during her time in a lunatic asylum means she is able to channel other people’s thoughts, which turns out to be a very useful tool for collecting data for aliens.

After getting to know Trudy a bit we are treated to glimpses of many of the people she channels. While these people are not actually certifiable, they all seem absolutely bonkers in … you know … an ordinary, modern way. 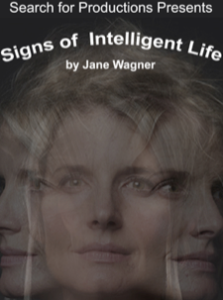 From the bored housewife to an air-head aerobics bunny who is obsessed with personal improvement, through health junkies who “looked like organic Ken and Barbie dolls” at their wedding to an angry punk performance artist and a delusional coke-head jock, they all seem stark-raving mad. Douglas takes us on a whirlwind tour of hysterical and hilarious characters from mainstream life, with a couple of hookers and a homo thrown in for good measure.

What these people have in common apart from being “carbon-based life forms” seems to be that they are unhinged in some way or another without actually being certifiable. Functional lunatics, you might say. Amazeballs!

Douglas absolutely owns each one of these characters and switches between them with enormous skill. Steven Feinstein directs this razor-sharp version of Jane Wagner’s play, which debuted on Broadway to amazeballs reviews in the 1980s.