Grahamstown: Karoo Moose keeps the audience enthralled as it tracks back and forth across the line between fantasy and reality, dipping into each and pulling out characters that mostly fall somewhere in between. Somehow in this imagined landscape we begin to get our heads around reality.

Set in an impoverished Karoo village, not unlike many of those surrounding this chilly university town, the sensational production reunites the original, award-winning cast nine years on and looks set to build significantly on its earlier international acclaim.

But what is the moose doing there? How did the family unit disintegrate so badly? When did the moose get there? And don’t get me started on the violation of children.

It is all pretty confronting but, as ever, Lara Foot, the National Arts Festival 2016’s featured artist, gives us a lot more than gritty realism. She knows too well that sometimes it takes a little fantasy to help us get our heads around reality.

This powerful, layered, and expansive production, performed in English with isiXhosa, is both thrilling and devastating. It calls to all of our emotions as it fills every corner of the stage. Expect laughter, warmth, tears, and horrible chills. 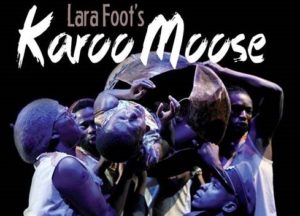 Karoo Moose is one of three productions by Foot at the National Arts Festival 2016. In addition to restaging Karoo Moose and another of her award-winning plays, Tshepang, her new play, The Inconvenience of Wings, premieres at the fest.

“Her prowess as a formidable arts manager under a challenging funding climate is most admirable. Under her wing the Baxter Theatre Centre continues to be one of South Africa’s leading theatres.

“Her commitment and passion for strategically devised development initiatives has also created opportunities for many emerging artists to be catapulted into the mainstream,” he added.

With a passion for the development of new indigenous work as well as young writers and directors, Foot has invested a lot of energy in helping playwrights and theatre-makers realise their work. She has nurtured several dozen new South African plays to their first staging and has directed more than 50 professional productions, 38 of which have been new South African plays.