One of Africa’s best and brightest coming home 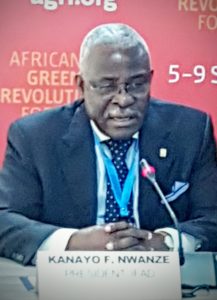 Stopping short of slamming the door on a career in politics, Dr Kanayo F. Nwanze, the Nigerian national who is president of the UN’s International Fund for Agricultural Development, on Thursday made it clear that he would continue to dedicate himself to the service of Africa’s young people when he leaves the Rome-based IFAD in a few months time.

Talking at a media briefing at the African Green Revolution Forum at the UN African headquarters in Nairobi, Nwanze told the African News Agency that he definitely intended to return to Nigeria after his term at IFAD ends. However, he said he had not decided exactly what he would be doing, but referred to a line in a speech he gave on Wednesday evening when he was accepting the inaugural Africa Food Prize.

“Those of us who have been fortunate to achieve so much over a rich and full life time must now do everything in our power to provide our young people with opportunity and hope,” he said.

“We owe it to the 370 million young Africans who will enter the labour market by 2030, the young entrepreneurs and leaders of an emerging Africa who hold our future in their hands. And we owe it to our hard-working and resilient rural women – mothers and wives, sisters and daughters – to whom I dedicate this prize.”

By the time he made this gallant gesture he already had the room eating out of the palm of his hand. After he had greeted the assembled dignitaries – including sitting and former African presidents, leaders of various global organisations and assorted captains of industry – and thanking everyone involved in the award, he had said his deepest gratitude was reserved for the rural people of Africa, whom he described as “my foremost partners in agriculture and development for all the years of my professional life”.

Then followed a public apology to his wife, which won over any remaining skeptics. “I would also like to take a moment to thank my wife, Juliana, my partner and constant friend in life and work.

“But I also owe her an apology. Yesterday, instead of celebrating our 25th wedding anniversary, I had to leave the house at 5:30am to catch a flight on my way to Nairobi! There are not many events in life that compel you to sacrifice your silver anniversary celebrations!”

Readers might be expecting the next line to read – Nwanze for president, but at Thursday’s briefing, he said that he wasn’t sure about a career in politics because that would mean he wouldn’t be able to speak as frankly as he was used to doing.

This comment brought to mind something that Sheila Sisulu, former special envoy for food and nutrition security for South Africa’s Ministry of Agriculture, Forestry and Fisheries, said about him earlier at the forum. Sisulu had described Nwanze as sometimes holding Heads of State “kicking and screaming” towards smallholder farmers, forcing them to focus their attention on them. 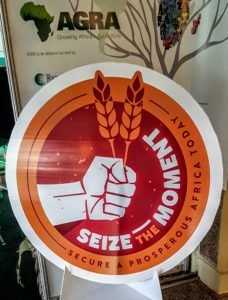 This comment, in part, was what motivated the African News Agency to ask him straight out: Would he consider coming home and rolling up his sleeves to get involved in politics? The answer to that seems to be: No … um … maybe.

Nwanze, who has long been a passionate advocate for Africa’s smallholder farmers, has been celebrated this week at the forum for his work putting them at the centre of the global agricultural agenda.
Around 1,500 delegates have gathered in Nairobi to talk about transforming African agriculture at a forum that has seen pledges of upwards of U.S.$35 billion from governments, international organisations and the private sector to help Africa’s green revolution.