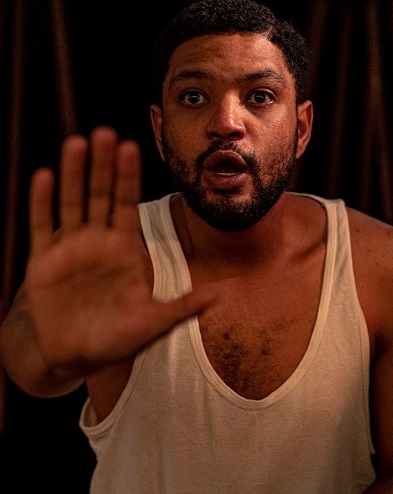 The fact that we are still watching plays like Statements After An Arrest Under The Immorality Act, which is showing at the Fugard, is evidence of how short a distance we have travelled in a reasonably long time.

Even if this new production of Athol Fugard’s powerful show, is my story, our story – whites and blacks, coloureds and Indians, men and women, boys and girls, ABCs and LGBTQIAs – it is also not each of our story at all.

Our past belongs to each of us so differently. Just when you think you might recognise a piece of your life (as a member of a modern-day mixed race couple, for example, ‘keeping immorality alive’) you find yourself in a theatre in front of a  couple of naked heterosexuals and you think WTH. Also, on a more prosaic note, one has to admit that being in a mixed race couple in 2019 is nothing like it would have been for these two sneaking around in a library (naked!) in 1972.

Yes! Naked! More shocking than apartheid to some.

Perhaps those same people who feel like apartheid never happened. “If people would just stop banging on about it, we could pretend that it didn’t.” Truth is, for some of them it never happened. For others, it never stopped happening. To narrow the gap, we need to keep telling these stories but with our eyes, ears and hearts properly open.

Ask yourself: In a different time would you have been one of these two sneaking around naked in the library, or the bastard neighbour who reports them to the police? Or maybe you would have just stayed home to watch Dallas. Presented by Eric Abraham and The Fugard Theatre in partnership with the Klein Karoo Nasionale Kunstefees, the show is directed by Greg Karvellas and stars Marlo Minnaar and Liezl de Kock. Set Design and Lighting Design is by Wolf Britz, Soundscape is by Charl-Johan Lingenfelder and Sound Design is by Charl-Johan Lingenfelder and David Classen. (No wardrobe to speak of)

Bookings via the Fugard Theatre box office on 021 461 4554 or the website at www.thefugard.com.

PS Become a friend of the Fugard, great pizza in their lovely bar where slick service is delivered by bar staff who are drop dead gorgeous.

PPS There is an age advisory of 16 years (I was not joking about the full nudity throughout).