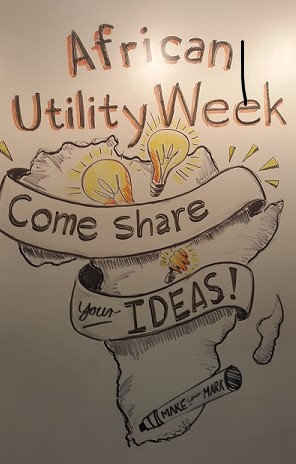 Anyone who witnessed Kandeh Yumkella’s inspiring keynote speech at the opening of the annual African Utility Week won’t be surprised to hear that the Sierra Leonean who is the UN’s first special representative for the Sustainable Energy for All Initiative (SE4All) leaves the event, which closes on Thursday, with a Lifetime Achievement Award.

In his opening speech, Yumkella, who is also chief executive of SE4All, first softened the audience up with stories about his own journey of leaving the stability and glamour of the life of a UN Under-Secretary-General in New York to move back to Africa. Then he switched tack and tone and issued a hard call to the audience to take action to end the “unacceptable” situation where so many millions of Africans were without power.

He urged the many experts and representatives from the various national and continental authorities in the audience to take note of the fact that up to 80 percent of people were without power in countries with enormous natural endowments. More than 5,000 power and water professionals were gathered in Cape Town for event from May 17-19.

In the context of last week’s World Economic Forum on Africa meetings in Kigali, which focused on the Fourth Industrial Revolution, Yumkella said Africa had financed the first three industrial revolutions, first with human resources via the slave trade and then with natural resources.

“The next one has to be ours!” he urged.

Africa, he said, had to break out of the trap of the commodities cycle. “We have been selling fruit and vegetables for 400 years,” he said. “We should be building factories.”

Yumkella, who is a former minister for trade, industry and state enterprises of Sierra Leone, said that 50 percent of fruits rotted on the farm in Africa, as did 40 percent of the tubers and 20 percent of the cereals. “We need to change that,” he said, noting that preservation, whether by refrigeration or processing, usually required electricity.

The African Utility Week lifetime award was given to him for his work on “the planning and implementation of the SE4All initiative, as well as engaging with the leadership of relevant stakeholders in government, businesses, academia and civil society at the highest level to advocate for and promote sustainable energy for all”.

Accepting the award at a gala dinner on Wednesday evening, Yumkella said: “I know the energy revolution is powering up and ready to take off. We saw again this week that we have the technology and the innovation. Sometimes we are too suspicious of each other, we should embrace energy trade with each other.”

In other awards given out on the night, Johannesburg’s City Power was named Power Utility of the Year. The award was given in recognition of the utility’s flagship Solar Water Heating Programme in which approximately 70,000 low income households around Johannesburg were fitted with solar water geysers. The project, run over three years, generated 20,000 job opportunities .

Sicelo Xulu, City Power’s managing director, said: “This accolade galvanises us to work harder to provide our customers with the superior service they deserve.” 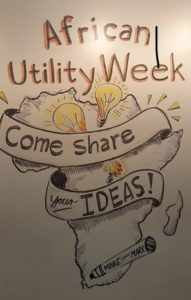 Albert Mugo, managing director and chief executive of Kenya’s KenGen, was named power utility executive of the year. He was awarded for his work in “executing a strategy of least cost power development options in order to provide reliable, safe and competitively priced energy to the nation”.

Uganda’s National Water and Sewerage Corporation cemented its position at the top of the table, winning the Water Utility of the Year for the second year running. This year, the NSWC, “undertook transformational changes in its operational and geographical mandate, providing new and homegrown solutions to water service provision challenges and highlighting its contribution towards the national vision of transforming Uganda from a peasant to a self-sustaining economy”.

Philip Gichuki, another leading Kenyan executive, took the title, Water Utility Executive of the Year. The managing director of Nairobi City Water and Sewerage Company, sole provider of water and sewerage services to Nairobi’s 3.8 million people, has “promoted the objective of the water sector in Kenya in improving access to water and sewerage services for all under a conducive environment for the consumers, communities, partners and staff working in the sector”.

The title Clean Energy Project of the Year went to the Akon Lighting Africa Initiative for its innovative solar-powered solution that provides African villages with access to a clean and affordable source of electricity. The group has operations in 15 countries, including Guinea Conakry, Senegal, Mali, Niger, Benin and Sierra Leone, and is covering over 480 communities.

The Development Bank of Southern Africa won the award for Pioneer in Project Finance for its innovative financing instrument designed to help local parties and communities acquire equity stakes in companies. The DBSA has so far replicated the model in 17 projects with a capacity of 2100 MW.

Lungile Mashele, energy specialist at DBSA, accepting the award on behalf of the bank, said: “The DBSA is responding to the call of government to support the renewable projects and would also like to get involved in projects beyond South Africa’s borders.”

The title Community Development Project of the Year went to Noble Water Solutions, whose Noble Power Station is the only high volume, low-maintenance, portable solar-powered water treatment plant of its kind in the world. Each water station provides 500 people with 20 litres of safe drinking water every day for life.

“We have a huge problem in Africa and we have to recognise that,” said Kevin Paxton, chief executive of Noble Water Solutions. “A third of the continent, that is 300 million people, do not have access to safe drinking water. We cannot develop as a continent unless we solve this problem.

“Our invention goes some way to addressing this problem, but where there is no political will, it will not happen,” he added.

Michael Njoroge, chief executive of Kenya’s Multi-link Group, took the Future Leader Award winner. He started Multi-link in April 2010 to supply clean cooking stoves and solar lanterns. The company is now completing the development of the 3M 40mw grid-connected solar project in Nakuru in Kenya, which will be the largest grid-connected solar project in East and Central Africa when it comes online in 2017.

It wasn’t only Kenyan men who caught the eye of the judges. Phyllis Engefu Ombonyo, director for business development at the country’s National Environment Trust Fund, was named Power/Water Woman of the Year.

The title of Energy/Water Efficiency Project of the Year went to George Airport’s solar plant, which is owned and operated by Airports Company South Africa. The solar photovoltaic plant, built on 200 sq m of land, has 3,000 photovoltaic modules, 30 inverters and a substation. The plant was built to meet about 41 percent of the airport’s energy demand.

Of the 15 small or medium sized enterprises, start-ups and young innovators selected to be part of the African Utility Week’s Innovation Hub, PowerOptimal was selected as overall winner. Its power demand management technology has been commercially proven in diverse installations such as hotels, office buildings, shopping malls and golf courses.