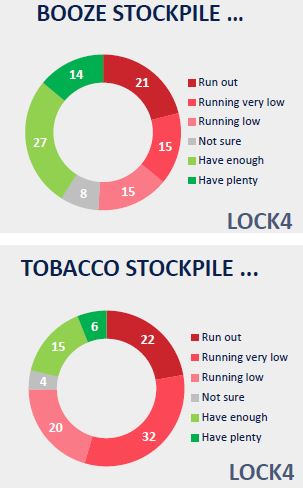 This little table, from the results of a continuing Covid-19 survey of South Africans, looks like a good representation of how President Cyril Ramaphosa was steadily building goodwill even as the police and army enforced a very uncompromising lockdown in South Africa … until Week 4. The downward trend in confidence in week 4 is nothing compared with the decline in the national mood in week 5/6 after Nkosazana Dlamini-Zuma took the wheel briefly.

After driving straight into the fragile bridge the president had been building, NDZ reversed her bakkie a few times to smash up the foundations of trust.

Yes, President Ramaphosa has an enormous job steering us through this crisis. My heart went out to him and I felt so cross when people laughed at him putting his mask on over his eyes at the end of his last TV address to the nation. Still, letting NDZ drive, even for just an hour, seems like a compromise too far.

Withdrawing what seemed like a peace offering from CR (allowing the sale of cigarettes in level 4 lockdown) seemed like wilful insubordination. Saying that she had consulted widely came across as an absolute porky pie (and was later confirmed as such by opposition political parties and the public at large).

Limiting civilians’ newly acquired liberty to go for a walk, a run or a bike ride to 2 hours of daylight (and one before dawn) seemed spiteful and dangerous (as confirmed by the mass descent on public spaces, such as the Seapoint promenade, pictured, as soon as the sun was up on Day 1, surely a breeding ground for any airborne virus).

All in all, she seems to be a spiteful, dishonest wrecking ball, much like her ex-husband.

From NDZ and her fellow petty tyrant, the gangster police minister, to the most disappointing of all, the communications minister, Stella Ndabeni-Abrahams, who was suspended at the beginning of the crisis in which she should have played a very important role (for openly defying the lockdown), CR is surrounded by a dangerously useless bunch.

We are all hoping the president can step into the void again soon.

The SACOVID survey continues to track life in lockdown in SA. Take part in the survey here: https://alltoldsurveys.co.za/SACOVID19F/SACOVID19.htm. Participation in the short survey will give you access to all findings.

Lots of interesting insights in here, some terrifying truths too. Thinking of the 22% of people who are saving money on ‘home help’ makes me wonder how those poor ‘helpers’ are surviving without pay.

A teenager wishes she could have a little bit of privacy from the 5 other people she shares a 2-room shack with. There is no space in her world, never mind 2m between her and the next person.

A grandmother, who lives down a dusty path, wants to wash her hands in taps that turn to allow water to come splashing out, like she has seen in the many houses she has cleaned in her lifetime.

The rape victim wishes the police had come when they were called, like they did when someone reported that a tavern down the road was selling alcohol.

Be careful what you wish for…

A father might have wished other South Africans – especially those who seem to make things happen– knew what it was like to have their children stalked by a silent and unseen killer that travels in the air between us.

On the other side of town, another father wishes he had more time at home and less pressure to be somewhere … dinners, meetings, theatre, squash games, parties … how we suffered from the plague of busy-ness.