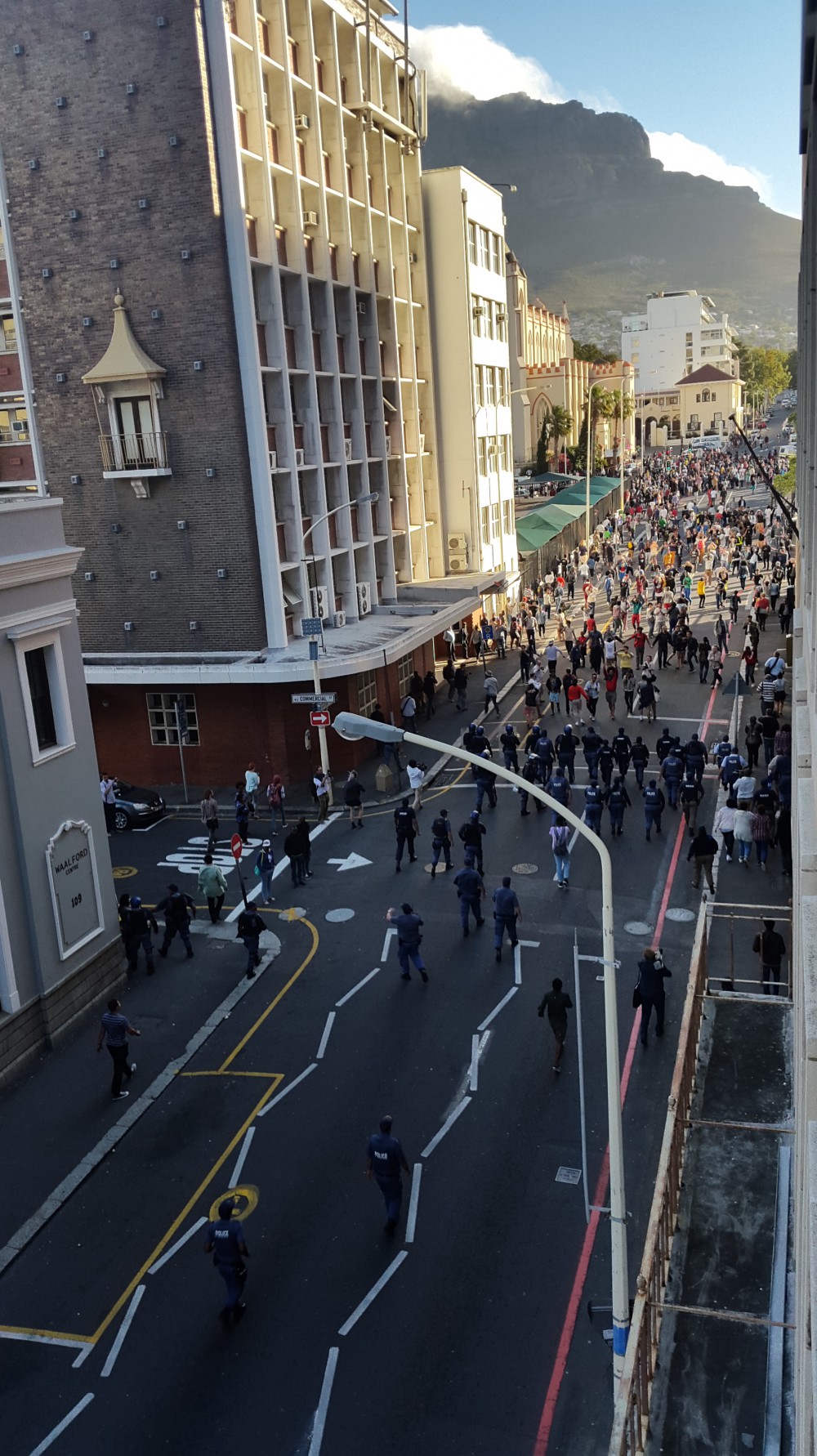 I can’t help wondering why we don’t look at this Zuma-Nkandla thing through an ordinary lens.

Why do we not measure our politicians by the same standards as we measure other human beings? Zuma has proved himself to be a horrible human being, yet that somehow is not enough for the ANC to give him the boot … and no one else has the power right now.

It is certainly not because he is unusually gifted at unifying people or extraordinary at creating policy. He is not someone special. I think we are all clear on that.

And who, once they have spent two years fighting against paying what is their due, get another third of a year to pay back (some) of the money. WTF?

The guy is greedy and opportunistic and dishonest. I am surprised that doesn’t make him unfit for the highest office in the the land … whether or not anyone can really make it stick that he defied and defiled the Constitution.

Tensions were very high after a long, dusty, nervous day of skirmishes, fires, pepper spray, teargas, stun guns and even rubber bullets. Zuma came out of the air conditioning late in the afternoon and agreed to the students’ original demand of zero fee increases next year. Yay, we all thought! They have won and #FeesHaveFallen shot around the Twittersphere.

But quickly people started to realise that Zuma had not actually committed anything from the government. He may not have an education to speak of but he certainly is a wily old dog. Without committing the government to spending one more cent on education he smashed the ball back into the students’ court and handed the mess over to the universities (a dummy pass in rugby parlance … funny that). This decree from on-high of zero fee increases is quite probably not legally enforceable either. As I said, the wily old dog!

But the students are not stupid, and they are not finished. Besides which, the anger and protest had already spread beyond the universities. A gathering in Stellenbosch on Saturday morning forced police to close streets down. People interviewed about why they were there said this was no longer just about fees. Others said they were sick of the ANC’s corruption and skewed priorities. Expect more action around the country in the coming days as a very dissatisfied citizenry regroups and mobilises around different, but related, issues.

It might have looked like South Africa had fallen for Zuma’s dummy pass on Friday, but revolution was still very much in the air on Saturday, with #FeesMustFall much more visible even than #AllBlacksMustFall. Don’t under-estimate the relevance of this in a country where people seldom unite over anything other than a bunch of adult men running around kicking a ball.

So what’s next? Maybe #ZumaMustFall … and of course #KangaroosMustFall or #PumasMustFall …

Talking about a revolution, October 22

It has been surprising that so many people are turning on South African students who are protesting against fee increases.

The same people who have been complaining that the born-frees, the generation born after the apartheid era, are spoilt and lazy, that they are waiting for handouts. Well this has blown that theory!

So now the complaint is about vandalism and hooligan-ary (is that even word? It should be … especially with that cheeky little hyphen). People are claiming that the students are stopping others from studying and writing exams, that assets are being damaged and stolen on the way.

Democracy can be messy; there are worse things to say about the alternatives. There are always going to be rogue elements (students, police, even dinner party guests) but let’s keep our eyes are focused on the fact that, finally, a constituency of South Africans has (sort of) articulated their problems (non-delivery, broken promises, leaders with fucked up priorities) and taken them to Parliament.

Police form a human wall (with motorised back-up) to drive the students away from the streets around Parliament on October 21, the day the students broke down the doors of the ‘palace’ demanding free education
(as they had been promised).