Back by popular demand: #FeesMustFall

Back by popular demand! The Fall will be showing at Baxter Golden Arrow Studio from June 8 to 24.

Professor Pumla Gobodo-Madikizela, Research Chair of Studies in Historical Trauma and Transformation at Stellenbosch University, wrote of The Fall: “With all the images of violence in the media, it can be easy to lose sight of what sustains the journey that began with Rhodes. The Fall takes back the narrative and invites the audience to look beyond the headlines and to see the real human stories. It is a powerfully acted play, a profoundly complex and moving portrait of students’ struggle to free themselves from the burden of the historical legacy they inherited.”

What a pity that before assembling a team to look into the cost of higher education – a team that, incidentally, looks better suited to dealing with international espionage – President Jacob Zuma didn’t spend some time this week as a member of an audience at the Baxter Theatre marveling at our country’s young people.

In watching The Fall: All Rhodes Lead To Decolonisation he could have heard firsthand the informed and eloquent arguments of a diverse group of recent UCT graduates who were involved in last year’s seminal #RhodesMustFall protests.

The relevance of watching this production while universities around the country are exploding with anger and frustration is magnified by the obvious intimacy the performers have with the stories.

The frank, collaborative piece of workshop theatre was devised by the cast, with facilitation from Clare Stopford. Oarabile Ditsele, Tankiso Mamabolo, Sizwesandile Mnisi, Sihle Mnqwazana, Cleo Raatus, Ameera Conrad and Thando Mangcu draw on their own experiences, making for a richly textured depiction of the issues and ideologies present in the movement. The production is directed by Conrad and Mangcu.

The subject matter is expanded beyond statues and fees, syllabi and social classifications. Discussions of race, class and gender, patriarchy and sexism are all expanded to what feels like the edges and beyond.

A surprising and subtly handled storyline focuses around Cleo, who identifies outside of the normative gender labels. This narrative relating a personal non-binary experience in a hetero-normative landscape also provokes a challenge to media bias.

Where are all the queer bodies, the trans bodies, Cleo asks. Why aren’t they represented in history or media coverage? After all, no one doubts that they turn up when they are needed, “manning” the barricades when there is a fight to be fought.

The absurdity of racism is laid bare in ways that frequently make the audience wince. Humour provides great (if occasional) relief.

We smile a rather grim smile as we hear about the moment when, as the statue of Cecil John Rhodes is finally being removed, it dangles above the plinth for a moment “as if deciding whether to go, or to fall and crush the black bodies beneath it”.

As much as that moment of removal was invested with much meaning, a moment when, in one performer’s words, the “ancestors’ dignity was restored” it was just a moment, a moment that has passed. The play goes on to unpack how this symbolic moment extended into a series of other pivotal moments.

Moments when dignity is restored are few; much more often it is the opposite.

In one excruciating moment the audience is given some insight into the horror of proving you are poor enough to be given a loan to help with fees. Here, all of the family’s shame must be laid out for all to see, often over and over.

The shame of association is piled on some of us when one of the students talks about a white classmate saying that black people were better suited to working outdoors because of the pigment in their skin. White people, according to this theory, needed to remain indoors … running things, you know, governing and so on.

Those familiar with the preference for shortening “tricky” names turned scarlet when we were told to: “Learn my name!” A second lash of shame was delivered with “like I have learned the names of Tchaikovsky and Dostoyevsky”. 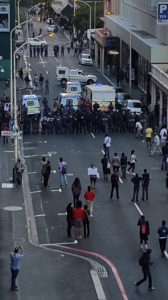 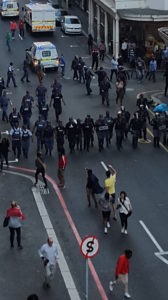 And so the struggles – long and short, big and small – continue. #RhodesMustFall, #OutsourcingMustFall, #BladeMustFall, #FeesMustFall.

At the heart of it all lies South Africa’s stalled transformation process. We are left feeling that money must be found to fund this part of decolonisation.

Maybe there is some money in the defence budget? Extra cash in the state security system’s coffers?

Aah I see now … maybe the ministers of state security and defence and military veterans might be able to help after all.