Artists given licence to disrupt (as if they needed it)

2017 looks like the year disruption will come full circle at Grahamstown’s National Arts Festival, from June 29 to July 9. Last year’s call for proposals urged, challenged, prodded and provoked the original disruptors – artists – to shake things up a bit. We have just a few weeks to wait to see how they responded.

Urging dare devils and disruptors to enter their work for the 2017 festival, incoming executive producer Ashraf Johaardien said last year: “We want to examine how the arts challenges mainstream ways of thinking, its responses to disruptions to the status quo, as well as how it disrupts conventional artistic boundaries and conventions to create new artistic territories.”

Johaardien said he hoped artists would “do more than think outside of the box” when responding to the theme, Art and Disruption.

“For me, this theme asks artists to throw away the box completely. Airbnb has revolutionised travel, Uber has reshaped transport and Netflix has changed the way we digest television. I am hoping we see submissions that do the same for the arts.”

Sounds like a challenge that the bad boys and girls of the arts world would have found irresistible. Roll on June 29!

But before I have a look at this year’s schedule let me take a look back at some of my (kinda disruptive) favourites from the National Arts Festival of 2016: 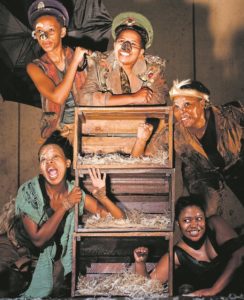 The show pulls no punches as it documents an ever-speeding descent into madness when the liberated become the oppressors. Hints that this ruling class at war with itself references recent goings on in Parliament in Cape Town builds more and more obviously until we have no doubt about whose “fire pool” we are splashing about in.

One can’t help thinking that some people really do set themselves up to be made fun of. This show capitalises cleverly on South Africa’s surplus of excellent material for satire.

This adaptation was originally created to help South African high school children better understand Animal Farm, a school set work, which should explain why it might, in the words of director Neil Coppen, “sometimes feel a bit 101 to people who are more political”.

Leaving little room for misinterpretation didn’t come across as dumbing down at all, though. Stating what might be obvious to some is brave in a world where things are intentionally kept a bit vague so as to keep all options open.

The cast of five black women morph in and out of masculine and feminine roles and gender often seems to disappear. There are, however, moments when the audience is reminded of the overwhelming masculinity of most of our real-life power players.

The tempo and suspense builds to a crescendo, with all of us hanging to know what happens next…

The story behind the story: also deliciously demented

Kahn is best known for her two previous shows, the international cult hit The Epicene Butcher and last year’s sellout success, We Didn’t Come To Hell For The Croissants.

She plays all characters in In Bocca Al Lupo herself, employing various cunning tricks and technologies that make it feel like we are watching her interact with others. 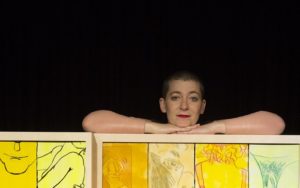 After finishing her degree, Kahn tells us, she decided not to follow the well-trodden path of a drama graduate (along the lines of get degree, get agent, develop eating disorder, become estate agent). She has the audience in stitches as she paints a very funny and somewhat scandalous picture of a few horrible, if interesting, years travelling the world and trying to work out what she was going to do with her life.

If her life is not, in fact, filled with lovable and loving people, she does a very good job of making it look like it is. With the exception of the Speed-guzzling, posh-hating Irish boyfriend, who sounds like he could have done with a good telling off and probably a scrub, her characters are all damn near adorable. Who wouldn’t like a granma called Fufu who helps fund your dreams.

The play has its sad moments (whose life doesn’t?), but mostly this beautifully illustrated tale has us laughing our way around the world. Her use of Kamishibai, a form of Japanese street theatre where a sequence of images are displayed in a frame to help tell stories, is as slick as it is visually pleasing.