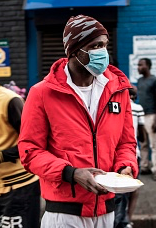 So there is a lot to say about Lockdown in South Africa, writes Renate Meyer, the clearest message is that it highlights the inequality and inequity of our society, a trend echoed the world over.

At this stage most people are aware that outside of co-morbidity, age and – in some cases – gender, the largest factor for those most severely affected is long-term access to nutrition and health care, basic living standards, and job security (if any at all).

For the first time in most of our lifetimes a global health crisis has meant that the general public seem to have an awareness of the importance of epidemiology, data analysis and hand washing. In short, the effect of public health on the global economy and planetary wellbeing.

A second trend is the resurgence of the part media plays in highlighting perceptions of populations.

Let’s take the case of the couple arrested along the Muizenberg promenade as they ran after their toddler who had veered off the walkway (allowed under Lockdown 4 regulations) onto the beach (not allowed). By all accounts a harrowing experience and an incident that highlights the valid fears of many around the uneven approach to policing and knock on effects of such actions.

My question is if that incident, which has gained relative traction along with the surfer protests and the person verbally abused for practicing yoga near that same beach, is something one can identify with rather than the daily reports of endless queues of people hoping to receive a basic food parcel as their families have nothing to eat for days?

Then there is the report of the woman arrested for selling achar without a permit, or the residents who highjacked a meat truck and drove it into an informal settlement (later returning the truck). Civil liberties and basic rights become murky in a country of inequality.

One point is that in times of heightened anxiety it is a ‘normal’ reaction to respond to a singular act of injustice which highlights one’s own feeling of lack of control over our lives. An externalisation of fear which often creates a flurry of support around injustice and a validation of ones subject position.

That is not to say it’s not valid, it’s more around how difficult it is to imagine 3.5 million people in South Africa literally not having food to eat. Or the fact that globally 25,000 people die of hunger every day.

Yet the spread of Covid-19 has captured the global imagination and the response is phenomenal, as is the money that has come out of the woodwork to treat it.

But comparisons are not necessarily helpful. Maybe some South Africans do feel like they have a taste of what apartheid was like and for many middle class South Africans this may be the first time their liberties are controlled.

Maybe in all of it, when ones right to freedom of movement feels managed or threatened it is a place for reflection around other basic rights to life and livelihood. The next step is to determine what actions are most suitable across the strata.