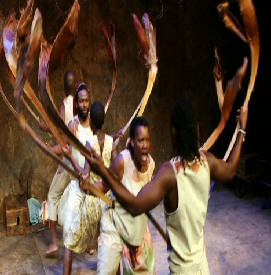 After a fierce and fiery start to the National Arts Festival on Thursday, expect another steaming day.

A couple of brassy birds (Ladies of Midnight Blue) warmed things up on opening day on Thursday and a fiery one (The Firebird) turned the heat right up. By the time I got to Saints bistro for some late night jazz, I was on fire.

On Friday it seems like a cool morning but things look set to heat up fast.

Take some simmering tensions as a mother and daughter pack up their home, add some flammable dialogue/liquid to it and you have a recipe for combustion in this morning’s production of Sillage (Sillage siːˈjɑːʒ/ noun: the degree to which a perfume’s fragrance lingers in the air when worn).

That should get things all warmed up for iLembe, which depicts the last few months of the life of Shaka Zulu. Need I say more? Expect temperatures to soar.

If I were forced to choose the hottest ticket for today I would pick Lara Foot’s Karoo Moose. As the National Arts Festival 2016 featured artist, Foot will stage three productions this year: the world premiere of her latest play, The Inconvenience of Wings, and restaging of Tshepang and Karoo Moose, two of her previous multi-award-winning works.

Foot leads the charge on the main programme this year, which is made up of 80 percent of work written, directed, curated or headlined by women.

The chief executive and artistic director of Cape Town’s Baxter Theatre, Foot is a former Rolex protégé to Sir Peter Hall, a Sundance Fellow … and always cooking with gas.

But what is all that heat without a little bit of spice. The “one-woman comedy riot” B!*ch Stole My Doek is sure to provide that.