As irresistible as it sounds

Ladies of Midnight Blue starts out gently, playfully. Two women drumming. It is rhythmic and somehow hypnotic, you follow them down the path. The beat speeds up faster and faster, two people with so many hands on the drums. You are in a trance, you would follow them anywhere. Next thing you know it is you beating the drums with the energy and rhythm of a beautiful stranger.

I thought this Afro-Latin percussion and brass duet – Hannabiell Sanders and Yilis del Carmen Surielis – who play instruments as if they were an extension of their body, might start a riot. They could certainly have done so but they were just too focused on making love to the songs, the instruments, the audience to start any trouble. 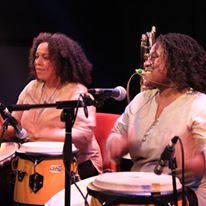 Every part of their bodies seems to want to take part, as does every part of ours. Sanders is whispering sweet nothings into her trombone, her feet tapping their own beat and her thighs squeezing a drum between them as if to coax other sounds out of it. Surielis, meanwhile, is a steadying influence, appearing to hold the space and the rhythm like someone holding the string of a kite flying wildly and gloriously on a windy day.

There is one more chance to see Ladies of Midnight Blue at the National Arts Festival, at 7pm on Saturday. After that, the ladies will be running a number of workshops. For more information and tickets go to www.nationalartsfestival.co.za

1 thought on “As irresistible as it sounds”