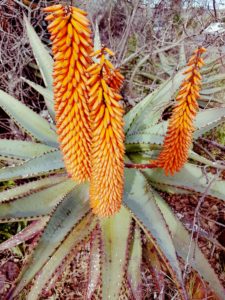 A short-ish drive (130km) from Port Elizabeth airport to Grahamstown is just perfect to re-calibrate heart and mind, aka get one in the mood, for the National Arts Festival, which opens on Thursday and runs until July 10.

The road to Grahamstown from the airport that most locals, students, actors, producers and a selection of international talent scouts use to access the town is beautiful in a truly South African way, that is to say it makes one feel a little uneasy, even maybe just a tad heartsore.

There is something about the Eastern Cape that feels at once familiar and brand new. To so many people the heartland of South Africa, this region always makes me feel that I can see what I call my memories of the future, that bitter-sweet mixture of nostalgia and hope.

The hills and koppies are scorched and dry, yet the aloes are everywhere and bright fiery red in full bloom. Parts of the road are absolutely world-class, feeling super smooth and safe. But then of course there are the roadworks, evidenced by backed-up traffic, blocked off lanes and lines of men and women in the sun waving red flags to slow motorists. By the time one arrives in Grahamstown you are reminded that this place beats to its own drum.

The university town and its 70,000 full-time residents welcome tens of thousands of fans of the arts from all over the world every winter at the biggest annual celebration of the arts in Africa. The National Arts Festival is a truly international, world-class affair, but it is also a quirky little number, quite unlike anything else in the world. 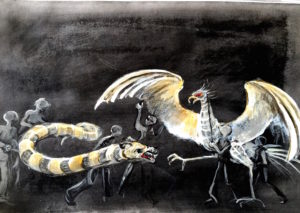 Thursday’s hottest ticket seems to be Janni Younge’s production of The Firebird, which opened for a very short run in Cape Town at the weekend. Described as a “thrilling multi-sensory journey”, the combination of dance and puppetry is on in Grahamstown before heading to LA for a run at the Hollywood Bowl no less.

As if there was not already magic enough in the Russian fairytale about the glowing bird, this production uses giant puppets and features dance which has been infused with tribal rhythms and more than a nod to African folklore. Younge – of the Handspring Puppet Company – has set it to Stravinsky’s original score. Choreography is by Jay Pather.

The National Arts Festival is an important platform for new and groundbreaking artistic work such as Firebird; it also has a long history as a forum for political and protest theatre, especially during the apartheid era.

Ladies of Midnight Blue, showing on Thursday afternoon, an Afro-Latin percussion and brass duet, look likely to resonate with the protest theme. They have performed all over the world at festivals, charity benefits, peace rallies and protest marches.

Their foot-stomping music, powerful and upbeat combinations of percussion, brass, vocal chants and mbira arrangements inspires dancing and calls for audience participation … and might even start a riot.

Firebird and Ladies of Midnight Blue are just two of so many shows, but one must not think about the fact that to choose a show means to miss so many others.