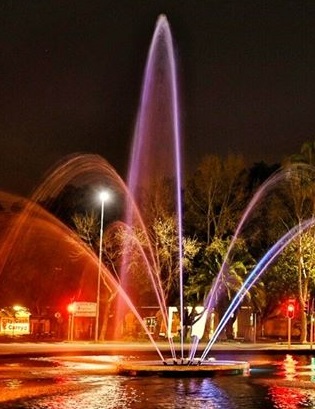 As we celebrate the opening of the heavens, we are knocked sideways by the apparent lunacy of the reopening of the Adderley Street fountains.

Spraying water around in an empty city centre … really?

The City of Cape Town reported on August 11 that total capacity of dams supplying the Cape Metro increased by 2,6% to 80,4% for the week 3-10 August 2020 …. and the heavens have opened a couple of times since.

“Dams filling to over 80% is a significant milestone for the city. Although there are still almost two months left of the traditionally rainy season, it looks like there is a good probability that we will go into spring/summer in a fairly strong position, especially considering continued low consumption by residents,” said Mayoral Committee Member for Water and Waste, Alderman Xanthea Limberg.

The fountains in Adderley Street have been switched on again … and people seem genuinely pleased. [Cue head scratching]

Call Off The Search wrote to the City Council to ask what the thinking was. We were also keen to know if anyone had objected to this project to refill the fountains. We received a couple of answers.

Apparently, the fountains being off (because of Level 11ty-million water restrictions) had led to an increase in “vandalism” and “anti-social behaviour”, and complaints from “property owners”.

I remember driving past there a few times when the fountains were off and thinking how delightful it was to see that local children had claimed the space. They were skateboarding and playing ball games, perhaps even painting some graffiti.

Are we the only people in Cape Town who think that those refurbished and refilled fountains stand as a rather vulgar monument to our inability to learn from our mistakes?

Cape Town is just about closed, there are no tourists, we are trying to recover from a devastating drought, but the city has spent money and focused energy on restoring inner city fountains (water capacity is estimated at 50,000 litres). Why? To keep children away?

We are so delighted that the rains have brought a little good news at this tough time, but feeling very anxious at the thought of that glorious, liquid bounty being sprayed around in a well-lit display (don’t even start us on electricity supply issues) in our empty streets.

Wouldn’t Cape Town (and the world) be a much better place if the energy and the money spent on refurbishing this outdated and inappropriate monument was spent on making safe and exciting places for the children who live in the city centre, the children of landowners as well as the many homeless, to play together …

Please share your thoughts in the link below this article.