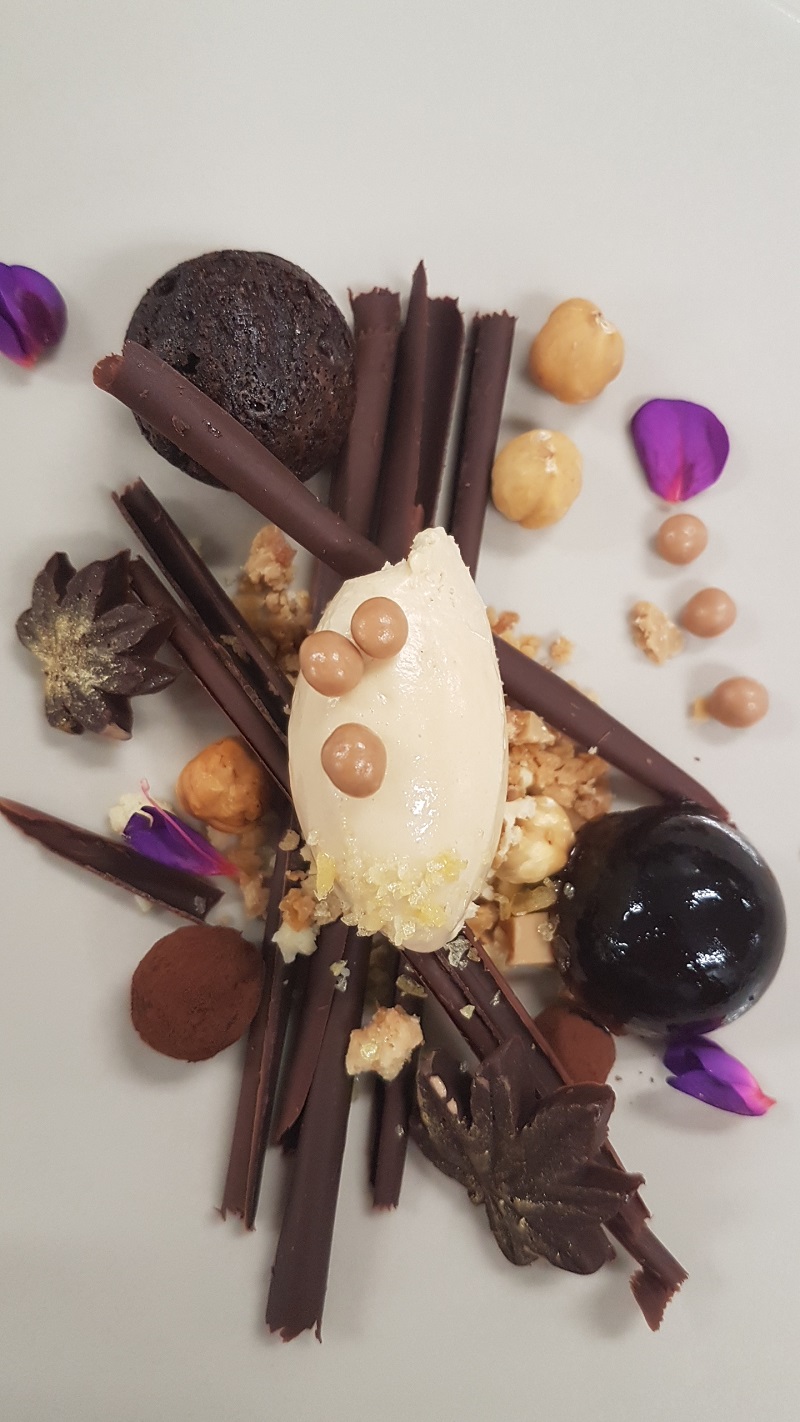 The ‘hautest’ of foodies might look down on the casino complex culture otherwise so popular in South Africa … but perhaps not for long, if a recent lunch at the Chef’s Table at soon-to-opened Time Square at Menlyn Maine in Pretoria is anything to go by.

The R4 billion Time Square development, which will be the second largest casino in South Africa after Cape Town’s GrandWest Casino, opens on April 1. A group of journalists on a tour of the final phases of construction were given a taste of the complex’s delectable food and beverage offering.

Brett Hoppé, general manager for Time Square, said: “What we have done with this property is try to break the mould… We really wanted to make it completely unusual.”

Time Square will include 18 restaurants, lounges and bars offering a diversity of cuisines and experiences. Notably the list of restaurants excludes any franchised concept except for a Spur, which seems like a natural fit for the children’s area alongside the arena.

Hoppé said they had some “really cool and funky” food and beverage outlets, all of which had been purpose created. Some were brands that Sun International owned; others they were partners in.

The lunch at the end of the site visit was very much purpose-made, having been prepared by five of the company’s top chefs.

After seating the touring party at an immaculately set Chef’s Table in the kitchen, Ronald Ramsamy, Sun International’s group executive chef, explained that the kitchen would serve as the nerve centre for all the restaurants in the complex.

One could only imagine that it would never again be so peaceful and quiet that one could hear the delighted murmurings of fellow diners.

Chef Ronald introduced the chefs who had designed and prepared the menu for the day.

First up was Chef Justin, who soon narrowed the distance between us by likening the first course to a first date. He will probably soon have his own TV show, I thought.

His steak tartare, with nods to the traditional and shouts to modernism and individuality, seemed the perfect start to this meal that felt like a metaphor for Sun International’s re-invention of the food and beverage experience.

Jack Lester, Time Square’s food and beverage manager, who Hoppé describes as having “one of the finest palates in the country”, had chosen a La Motte Syrah/Viognier 2013 to accompany the starter.

Both choices of starter and wine were a little surprising to me, like Tchaikovsky opening the 1812 overture with the cannons perhaps. Any shock at this rather muscular opening soon passed to be replaced by a quick succession of delicious surprises.

The charring was done to replicate flavours reminiscent of toasting bread on a grid and the choice of mosbaletjie, a traditional bread made from dough enriched with fermenting grape juice or must (soetmos in Afrikaans), added a thoughtful local touch.

If Chef Justin has a hint of the celebrity chef about him, he will be in good company in the Time Square restaurant environment.

The American celebrity chef and television personality Guy Fieri will be opening his first restaurant in Africa at the complex.

“We think it is a really exciting and unique offering,” said Hoppé.

Local celebrity will also be represented in the form of local chef and radio personality Fortunato Mazzone, and Joao da Fonseca, aka Mi Casa frontman J Something, both partnering in restaurants in the complex.

Mazzone – a much-loved opera-singing restaurateur from just up the road at Ritrovo in Waterkloof Heights – has described his new restaurant at Time Square, Forti Grill and Bar, as “the restaurant of my dreams … a fusion of food, wine, music and art, which is cutting edge, contemporary, exquisite and offers the ultimate in cuisine and hospitality”.

At our very own fusion of food and wine at the Chef’s Table in the Time Square kitchen things moved on to an elegant, second course, prepared by Chef Adrian and Chef Ramon.

It is hard to imagine scallop or even halibut appearing in anything but a starring role, but Chef Adrian told us they had built this dish around fennel pollen. He said he had been looking for the pollen of the subtle liquorice-flavoured herb for years and just a day before we met he found a farm that does “micro-cresses and micro-vegetables and all this delicious foliage”.

The chefs said they had kept their course light because they knew what was coming on either side. Served with an unwooded Meerlust chardonnay, this light course inspired by beautiful flowers and herbs felt more like a power nap than a rest.

Just thinking about the choice of places to eat and drink at Time Square makes one feel in need of a real power nap. Other options include Sun International signature food concept, the Brew Monkey gastro-pub, and KungFu Cowboy, an East meets West restaurant created especially for the venue.

These restaurants will be complemented by authentic Indian and Chinese offerings. “Those are something we don’t do ourselves,” says Hoppé. “The authenticity of that cuisine is critical so we don’t give it to our chefs, we find specialists.”

During a visit to a Baccarat suite on the tour Hoppé and food and beverage manager Lester had talked about cultural sensitivity, explaining that this card game, which is very popular with the Chinese community, was something that needed to be understood to be serviced well.

“There is superstition, culture and cuisine … In a heartbeat you can cause massive offence and then you won’t see that community again,” Hoppé explained.

My neighbour at the Chef’s Table – Simphiwe, a photographer who was raised in the Karoo – and myself were talking culture without causing any upset. That might have changed when Chef Chester announced that the next course would be sous-vide Karoo lamb.

I thought Simphiwe did well to say nothing, not even mentioning the French term for ‘under vacuum’, which describes a method of cooking where meat is vacuum-sealed in a plastic pouch and placed in a water bath at a controlled temperature for a number of hours.

The sous-vide process brings out an extraordinary tenderness in the lamb, which seemed to inspire a new tenderness in Simphiwe. Dare I say he murmured approvingly like a little lamb…

The lamb was served with a smoked ponce puree, baby carrots and a balsamic reduction for that hint of tartness. Why bother with a glass of wine, you might think. But I certainly wasn’t going to say no to a glass of Rust en Vrede cabernet sauvignon 2014, a perfect companion to the delicious combination of tenderness and flavour.

After a while, Simphiwe broke his silence to declare: “Heaven on earth!”

A breathy description that reminded me of Hoppé’s earlier comment: “I have been around the business for a long time, at Sun International for 27 years, and this property takes my breath away.”

We still had a couple of courses at the Chef’s Table to evoke breathlessness. The fourth course, a pre-dessert, was delivered to us by Chef Shaun, who was introduced to us as the ‘Molecular King’, along with a glass of De Grendel Shiraz 2015.

A dolce mousse with coffee jelly, a hazelnut and a malted salt caramel streussel on a bed of chocolate that looked a little like a bird’s nest … laced with some secret popping candy to (you guessed it) take our breath away.

You might wonder why so much effort is being put into the food and beverage offering at a casino complex. Hoppé explained that bars and restaurants are footfall drivers.

Sun International’s outgoing chief executive Graeme Stephens agreed. Even if creating the right experience and atmosphere in a casino is a lot less scientific than molecular cooking, he told us that a lot of time and effort is put into creating the experience.

“The experience typically in South Africa revolves around the experience value as much as, Am I winning or losing,” he said.

Stephens said many families visited Sun International’s venues without ever going into the casino. The restaurant offering is a very big part of a South African casino experience for many people, with choice and authenticity being key considerations in getting people to come back.

Hoppé said Time Square had created a service ritual for each restaurant. The various styles of being received and treated should be sustained, he said, from how you were greeted to how your bill was delivered at the end of the meal, the “last touch point on a dining experience”.

An example he gave was at the Globe bar, a super sophisticated bar in the complex, the bill will be delivered in a beautiful silver orb and handed over by a white-gloved waiter.

The last course at the Chef’s Table was a deserving companion to the champagne, Billecart Salmon Rose, served at its side. From the “little big-hearted pastry chef”, Lee-andra, the frosty, snowy forest that included white chocolate, apple, cucumber, mint, yoghurt gel, kiwi, quince sorbet and mohito macaroons …. Was the sweetest of farewells.

A grand and deliciously decadent end to a site visit that left at least one foodie wannabe hoping Time Square will be successful in its bid to reinvent the casino eating experience after the complex opens on April 1.