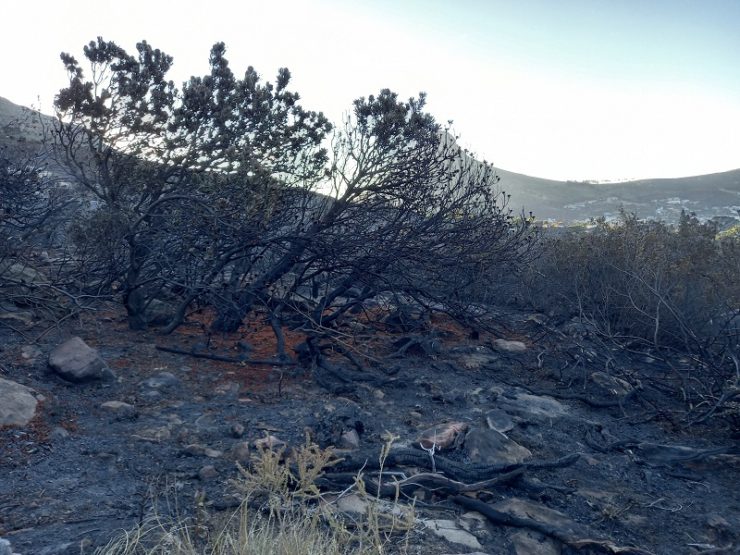 Burn it to the ground, build it up. Forests flattened, earth scorched and then miraculous regrowth … nature’s way feels a bit like a metaphor for Covid-19 (she said, hoping for the miraculous).

Last week Saturday we arrived home in the early afternoon (from a lovely day out with friends looking at art and lunching at a restaurant on a rooftop in Cape Town) to the horrible sight of plumes of smoke rising from the direction of Deer Park, a much-loved walking spot on the slopes of Table Mountain near our home.

I had walked there the evening before, as I do probably five out of every seven days. My dogs run and play as I am amble along in the dappled shade of dusty footpaths crossing burbling brooks. Every so often, I stop to admire a view of the city through a break in the trees and marvel at how close it is. Somehow it feels like I could reach out and touch it.

One of the great things about living in Cape Town is that you are so close to nature, both beach and mountain, yet always within easy reach of a cappuccino or excellent theatre.

The fire in Deer Park burned into the night, and homes in the neighbouring suburb were evacuated. That reminded me of the time I was evacuated from my home in the early hours one morning a decade or so ago when Devil’s Peak was on fire.

We all watched on Twitter, as we do, and answered messages from concerned friends. (Yes, we knew it was happening; No, we were not in any danger.) We thanked God for the firefighters … and then went to sleep to the sounds of a devilish wind that we knew was working against them.

We woke in the morning to air heavy with the smell of burnt forest and a film of ash on everything. We were relieved to hear the fire had been extinguished in the night, but nervous of what damage had been done.


There are so many small animals in Deer Park. We have seen all sorts of little beasts, from butterflies to beetles, squirrels, tortoises, porcupines, even crabs.

There are certainly many more that see us. The one I long to see is the caracal or African lynx, die rooikat, as it is known locally.

There are also the many thousands of species of plants (that grow nowhere else on the planet) that were just starting to celebrate the end of Cape Town’s dreadful drought.

When it was safe to go to Deer Park again, I did, and was happy to find much of it still standing. A relief, but still some sadness for the many creatures that didn’t make it.

It reminds me of how I feel about Covid-19. As life returns to some sort of normal, it is impossible to feel only relief and enormous gratitude although I feel that in spades.

I also have a deep sense sadness for the ones who succumbed, physically or financially, to the fire that was/is the global pandemic. The shells of shops and restaurants are a frequent reminder of losses suffered by others.

Back in the forest, it was a relief to be reminded that there are thousands of species of plant on the mountain that require fire to thrive. Since the fire there have been quite a few rainstorms (the ‘Indian Summer’ of rainstorms these, as they came very late in the season). The rivers have been replenished and (one expects) the growing season has been given a big boost.

Hopefully Mzansi will experience the same as we overcome Covid, shop for booze at our own convenience and hopefully limit the second wave that seems to be taking hold in some areas, the Eastern Cape particularly.

Hearing President Cyril Ramaphosa celebrate Aspen Pharmacare’s big contract to produce Coronavirus candidate vaccines for Johnson and Johnson was a balm. Seeing a few people in particular in orange jump suits would be a huge shot in the arm.