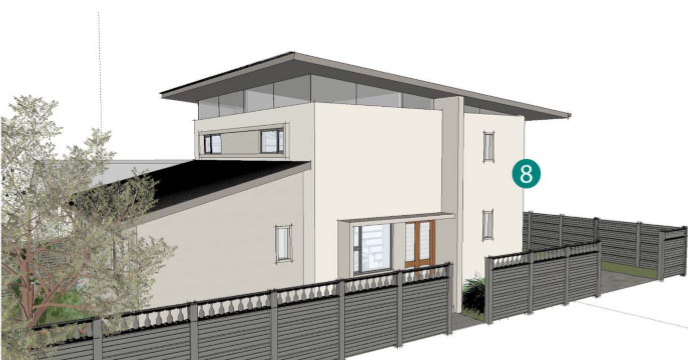 When a Cape Town-based architecture and interior design firm asked their staff to work after-hours pitching against each other to do a comparatively small renovation on a little house in an informal settlement on a tight budget, one might have expected a lacklustre response.

Who would have thought that a few weeks later, a grandmother from Nyanga would have five teams of architects and interior designers who are more used to designing palatial homes and glamorous hotels enthusiastically pitching to extend her RDP house. The super creative presentations stretched the budget of R100,000 in every direction and all seemed to shout, “Choose me!”

After receiving the brief, the staff at K/M2K seemed to form instinctively into five teams and worked evenings and weekends to come up with options to transform Nonzame’s (who asked that her full name not be used as she did not want to draw too much attention to herself) two-room, 28 square metre RDP house, where she and her daughter and five grandchildren live, into a more comfortable home for the large family.

The budget and scope of this job hardly compare with the large projects that K/M2K, a Cape Town-based architecture and interior design business with a portfolio of wealthy clients around the world, normally undertakes. Still, competition for the job was keen, and mean. It was obvious that winning this pitch carried value and prestige beyond money.

Transforming Nonzame’s house also offered these designers something that palaces in the Middle East or 5-star lodges in East Africa don’t – an opportunity to use their creativity to tackle an all-too-familiar problem on their doorstep.

Challenges outlined in the brief included security, since Nyanga is one of the most dangerous places in Cape Town to live, and lack of internal plumbing in the existing two-roomed house.

The five grandchildren, three boys and two girls, are aged from 6 to 28 years old, a spread that gave rise to a different set of challenges around privacy and problems such as one person’s study hours clashing with another’s sleep time.

The presentation to Nonzame, organised as a surprise by Keith Mehner, owner of K/M2K, who employs Nonzame as a nanny, was a buzzing and competitive contest of five very different proposals that seemed to cover every conceivable creative possibility with the space and budget.

Some focused on being practical and getting as much bang as possible for each buck; others let themselves dream a little. Everyone was concerned about security, and determined that the house, while being a lovely place to live, should not look too showy, which might make the family a subject of unwanted interest. The exterior finishes would also be carefully selected so that the house remained in keeping with the neighbourhood as much as possible.

The various plans included so many small, thoughtful details. There was a space to keep a television out of view. On the other hand, the designers were all focused on keeping children’s play areas and so on in sight of the adults.

One creative idea of fitting small glass cubes to walls to hold candles ticked a number of boxes, both practical and stylish. The safely-held candles would provide cheap lighting while avoiding risk of fire and would probably create a nice mood in rooms too.

As for water supply, there was a veritable storm of great ideas to make the most of the rainfall. All the designs included a garden of some sort, usually focused on growing vegetables and herbs for the family and a play area for the children. Again creativity was evident in absolutely every detail, from a pitched roof alongside the vegetable garden to installing raised vegetable boxes so that all gardening and harvesting did not require too much deep stretching and heavy lifting. A few suggested the use of defensive plants, which are pleasant to look at yet menacing if you get up too close, in certain areas such as in boxes outside of windows.

As for hot water, as one of the designers assured Nonzame, “We are going to fight with council to get you a solar geyser!”

All the designs paid heed to another challenge: where the family would live while they were renovating. This problem led one team to propose building up as well as out, with a lightweight structure that would be quick to add at a different stage from the downstairs addition.

The teams focused on designing a property that was low maintenance and and had low running costs, and talk about boxing clever when it came to storage solutions! Elevated beds with desks underneath or crates with cushions on them for seating or sleeping were suggested along with a variety of ways to make every space work in a number of ways.

Mehner said the idea of the competition came to him one day when he dropped Nonzame at her home. He realised that the situation in which she lived was extremely difficult and that he and his team could probably do something about it. He guessed (correctly as it turned out) that his team at K/M2K would be eager to get involved.

Presenting the idea to them, Mehner said: “Sometimes we lose touch with the reality of life around us as we design palaces and hotels in faraway places. This is a way to use our creativity to give something back.”

For her part, Nonzame was delighted by the whole idea and amazed at the levels of creativity and the effort put in by the teams. The clearly overwhelmed septuagenarian said: “God promised us a mansion in heaven. But I am getting one on earth.”

The drawings have gone to a quantity surveyor for feedback on costing and the search is already on for reclaimed materials and donations of goods or offers of help from suppliers or anyone who wants to help.

Another architectural practice in Cape Town is already reported to be plotting something similar. Like the metaphor about a hurricane being traced back to a distant butterfly flapping its wings, one small act may well trigger a revolution of using creativity … well … creatively. – Siobhan Cassidy/African News Agency