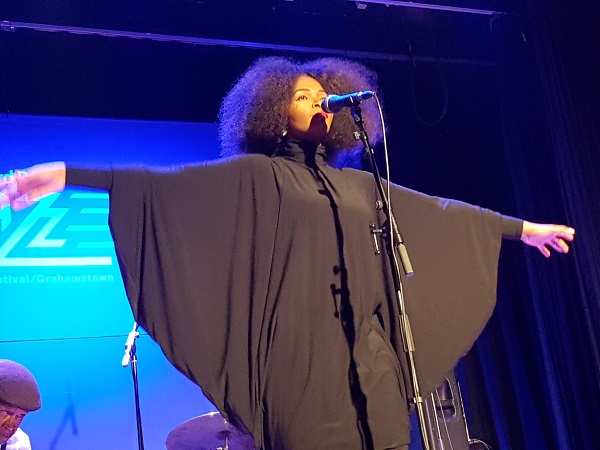 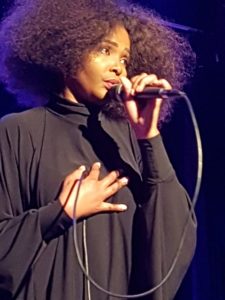 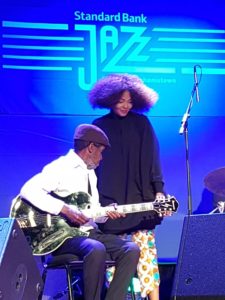 It would have been very difficult to actually upstage Simphiwe Dana on the last night of the National Arts Festival in Grahamstown, but if anyone could it would have to be the legendary South African guitarist Themba Mokoena.

Even when sitting down Mokoena, who is in his mid-sixties, seemed to struggle to keep his feet on the ground. Hugely popular with Dana fans, Mokoena’s passion is obvious, which makes him a delight to watch as well as to listen to. That said, the night belonged to Dana, who seemed at times to be renewing vows with a packed house of dedicated fans.

Dana arrived on stage complaining about nerves and quickly launched into Bob Marley’s Redemption Song. Singing mostly unaccompanied, the intensity of this song seemed to banish her nerves. Her version was more like gospel than reggae and gave at least one member of the audience gentle shivers of pleasure down the spine.

From there she slowly turned the heat up until the room was crackling with energy. The crowd erupted every time she started one of her own hits, and sang along approvingly when she covered other South African classics, such as Miriam Makeba’s super infectious Aluta Continua.

It seemed more personal than political when she noted the importance of the #RhodesMustFall movement and urged young people to continue their fight with “passion, honesty, and integrity”. She also urged South Africans to make more of an effort to integrate with the rest of the continent.

She underscored her point with a lovely cover of Malaika, the Swahili song written by Tanzanian Adam Salim in 1945 and made globally famous largely by Miriam Makeba’s recording.

The conversation between Dana and the audience flowed throughout the show, which ran for nearly two hours, making a large, packed hall feel very intimate.
At one point she asked if anyone would like to join her on stage and five people ran up. Each of them did a little dance for the audience, one of them literally dancing until he dropped or, rather, until he fell backwards coming out of a very high kick. That didn’t seem to knock him off his stride for long though, he was soon back up lifting Dana off her feet a big bear hug.

Despite a little competition from fans and the unstoppable Mokoena the night really was the gorgeous Simphiwe Dana.
– African News Agency (ANA)