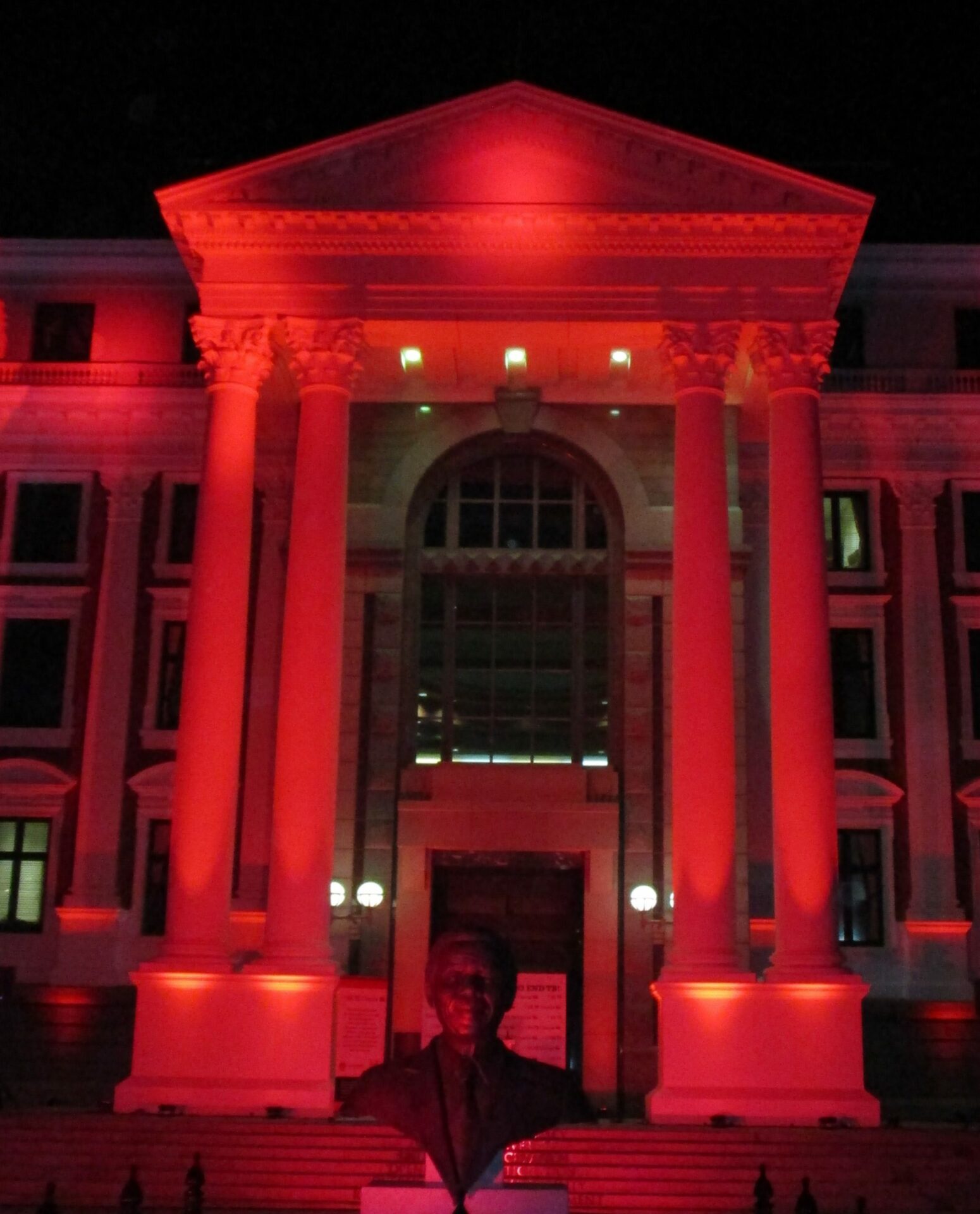 Dr Nomafrench Mbombo, MEC for Health in the Western Cape, lit up a small gathering at the South African Parliament on Tuesday night  with a short, rousing speech, and then flicked a switch that lit up the whole building in red.

Welcoming the MEC and Mzwandile Panziso, who was representing the South African National Aids Council (Sanac), Professor Harry Hausler, chief executive officer of TB HIV Care, drew attention to the relevance of the looming 3-week country-wide shutdown starting this Friday in an effort to slow the global pandemic Covid-19.  Not that the lack of a crowd at the event to mark World TB Day would have gone unnoticed by anyone there.

The professor, the MEC and Sanac’s Mr Panziso were not to be put off by the size of the audience, all spoke as if to a crowd of hundreds. That provided a good metaphor for what it is like to be in the frontlines of the battle against TB, which Mbombo described as a “granny” of a disease compared with Covid-19, and even HIV.

It was not for lack of interest that the gathering was kept to a bare minimum, but rather a mark of respect for President Cyril Ramaphosa’s request for South Africans to stay away from gatherings and public places.

The event, on a beautiful and breathless Cape Town night, had a very surreal quality to it, a small group of activists standing further than arm’s length away from each other, standing up against a killer disease.

We all had Covid-19 numbers fresh in our minds (the number of confirmed cases in South Africa having passed 500 during the day) when Prof Hausler sent a little chill around by mentioning a few TB stats (1.4 million people die a year globally, of 10 million people affected). The reality and the comparison added to the surreal mood at this gathering watched over by the bust of Nelson Mandela.

As TB HIV Care noted in their press release about the event, it is nearly 100 years since the first effective treatment for TB was made available, yet the disease continues to be the leading cause of death in South Africa, with more than 63,000 deaths out of an estimated 301,000 people sick with the disease in 2018. Prof Hausler reminded the group that 175 people die every day from TB in South Africa.

Even in the face of such a harsh reality, you can always count on MEC Mbombo to light things up with her passion and eloquence, and she did not disappoint those gathered for the lighting up of both houses of Parliament.

She might have been expected to feel frustrated by all the fuss about Covid-19 when the fight against TB doesn’t get the attention it deserves or the resources it needs, but she said she welcomed it.

“We are not going to waste a good crisis,” she said, and went on to draw parallels between corona virus and TB.

Dr Mbombo said she felt confident the attention given to Covid-19 would have a beneficial effect in the fight against TB. There are many similarities between treatment for these respiratory diseases, in particular the importance of tracking people who have made contact with sick people.

She added that even the upcoming three-week lockdown to slow the spread of corona virus would be good for the fight against TB.

Lighting the South African Parliament in red on World TB Day is part of the Stop TB Partnership’s worldwide initiative to put a spotlight on ending TB by ‘red-lighting’ important landmarks to focus people’s attention on the fight against TB.

The event was organised by TBHIV Care in association with the South African National Aids Council (SANAC).