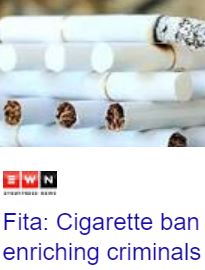 Pages 2 and 3 of the Sunday Times this weekend are devoted to an open letter to President Cyril Ramaphosa and the rest of the South African cabinet asking that the ban on tobacco sales be lifted.

The letter makes a compelling case for the lifting of the ban, which has never made any sense to the millions of us, smokers and otherwise, who want to support our president’s every effort to fight Covid-19.

The letter – which is signed by a number of corporate heavyweights, from British American Tobacco, the Southern African Agri Initiative to Fresh Stop and Spar – outlines a couple of main reasons (not including that smokers are dying to get their hands on a packet of fags … they have all been getting their fix somehow: illegal cigarettes, Mary Jane, crack cocaine … that sort of thing).

Reasons to lift the ban include:

The real killer punch of this message is delivered when the cost to South Africa of the lost R3.5 billion is outlined. It could have paid for:

What will SA be like post-Covid, be part of the survey: