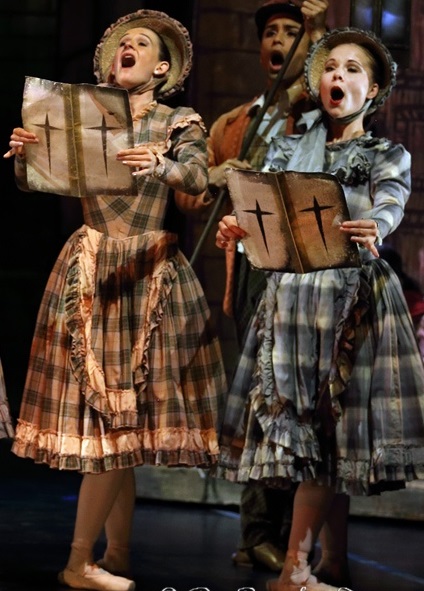 Cape Town City Ballet’s A Christmas Carol, The Story of Scrooge is excellent festive family fun, a classic-but-light lesson in the power of good over evil, of generosity over meanness. Real Christmas spirit stuff.

The cast, which often seems largely made up of children and child-like adults, delivers a jolly, heart-warming evening of playfulness and fairytale messaging.

Fans addicted to the breathlessness normally induced by CTCB’s slick modern routines see glimpses only of the dancers at their most impressive, their grace, precision and power showcased mostly in solos and pas de deux by the company’s stars.

Choreographer Veronica Paeper particularly maxes out on the freedom of depicting figures of Charles Dickens’ imagination: the spirits of Christmas past, present and future.

On the whole, this show is more heart-warming than heart-stopping. It is storytelling that makes everyone feel good … dance with a little nod to pantomime. Well, it is Christmas.

Marcel Meyer as Ebenezer Scrooge, his first role in a professional ballet, can certainly dance but he is not a dancer first and foremost. He is an accomplished actor, having played various roles in the likes of Macbeth and Richard III.

The contrast of a thespian of gravitas surrounded by dancing children enhances the metaphor of good versus evil. Cynics can’t help but be disarmed, surely, when they see that the closer Scrooge gets to redemption the looser his limbs become, the more he dances.

The show is laden with meaning, but it is simple lessons, fable and metaphor – charming for adults, absolutely on target for younger audiences. Good conquers evil convincingly.

After seeing the show, I could only congratulate myself for having bought tickets to next Saturday’s matinee as a gift for an 11-year-old budding ballerina I know. She will understand the story-telling and the messaging. She will go home  knowing for at least a day that everything will be okay in the end.

She will also be blown away (as I was) by the sensational sets and stylish costumes. There might be limits to human progress, there is only so much dancers can improve on the best of the previous generation, but the lights, the sets and the costumes just keep getting better in leaps and bounds.

What a treat this will be for anyone lucky enough to be given an early Christmas present of a night (or afternoon) at the theatre.

A Christmas Carol, The Story of Scrooge has been restaged by South African dance doyenne Veronica Paeper and features lighting design by Wilhem Disbergen and costume design by Dicky Longhurst. Playing at Artscape Theatre from 14 to 24 December. Tickets cost R150 to R295. Bookings at Computicket 0861 915 8000, online at www.computicket.com or at any Shoprite Checkers outlet.
Shows on 24 December include Fairy and Prince Fancy Dress Parade after each performance.