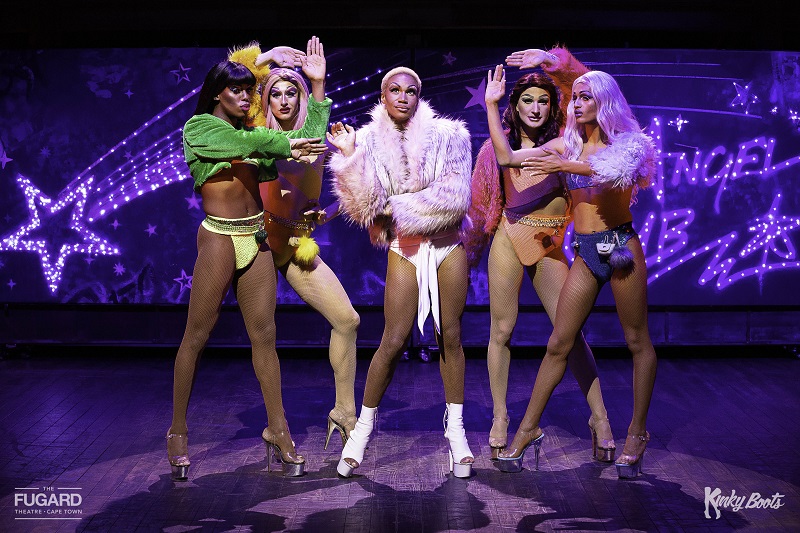 Review: Kinky Boots, at the Fugard Theatre in Cape Town, until October 27

Even the most curmudgeonly of curmudgeons will find it hard not to be cheered by this lovely show. Haters of the musical format, too, will be forced to crack a smile at how the cheesy formula of a preachy but ultimately uplifting tale set to catchy tunes has been rebooted into a riot of acrobatic, high camp set to pop-based songs by Cyndi Lauper.

When Charlie Price (Darren Craig) reluctantly inherits a shoe factory after the death of his father he has to come up with a plan to keep the failing business afloat. He returns to Northampton from London, where he had gone to make his own way, but it all seems rather hopeless.

Wonderful sets by Paul Wills and compelling performances from a large, hardworking cast help to take our minds off the many rather appalling attempts from the all-South African cast at a Northampton accent. I certainly couldn’t do any better myself but still I have to say that they are without exception very awkward to listen to. Still, maybe others in the audience thought the obviously faux silliness sounds just about right for the mad and quirky Brits, who seem to get more bonkers by the day with Brexit, Boris and all the other bollocks.

Our minds are soon taken off the accents when a chance encounter with Lola (Earl Gregory), a prize-fighter-turned-drag queen, gives Charlie, an otherwise rather uninspired chappie, a brilliant idea that brings the show to life. Charlie decides to stop manufacturing sensible, well-made brogues and try a line of thigh-high red stilettos with sturdy heels for drag queens, an otherwise untapped market, you’ll not be surprised to hear.

He decides to bet the business on this novel idea and before long Lola has called in the ‘Angels’, her crew of singing, dancing drag queens, much to the shock of the Northampton factory workers who surely have never seen anything quite like it.

There is much hilarity as the angels deliver many cutting lines and more high kicks, and win over the factory workers one by one. They are all eventually united in their quest for the perfect boots or, as Lola describes them, “two-and-a-half feet of irresistible tubular sex”.

It is not all camp craziness, though, with a little bit of space for the softer stuff of crushes and connections. As Charlie and Lola’s friendship develops, they discover camaraderie in their mutual experience of being men who disappointed fathers who had wanted sons created in their own image.

It feels familiar and real, everybody knows one, after all. We are not allowed to feel sad for too long, though. There are shoes to be stitched and catchy numbers to be sung.

It would be easy to dismiss Kinky Boots as just another preachy musical about being yourself. It definitely does shout Be Yourself, but that message extends beyond the queers and the crazies to an ordinary bloke who didn’t want to be a shoemaker.

Kinky Boots, winner of Tony Awards for Best Musical, Best Original Score and Best Choreography, and the Laurence Olivier Award for Best New Musical has wowed audiences on Broadway and the West End. This original South African production, presented by Eric Abraham and The Fugard Theatre, has locals falling head over heels too.